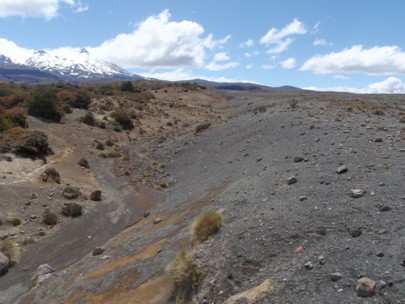 This ecosystem comprises a mud flow of water and volcanic material commonly caused by the bursting of a crater lake, eruption from a snow-capped volcano or from prolonged torrential rain. They may include boulders (> 256 mm) but are dominated by finer particles (< 2mm) including much sand, silt, and clay. Composition varies greatly among lahars depending on their source material. They can be many thousands of years old, but this category concerns only recent lahar deposits with minimal vegetation cover of mosses, grasses, and herbs with some shrubs.

There is no notable flora; fauna is unknown.

Their location in indigenous matrix reduces weed threat but Pinus contorta is a problem on the Volcanic Plateau. Lahar deposits are unsuitable for agriculture and not legally available for development. There is limited quantitative information on animal impacts but lagomorphs and possums may be a problem.

In association with mountains on the central Volcanic Plateau and Mt Taranaki.