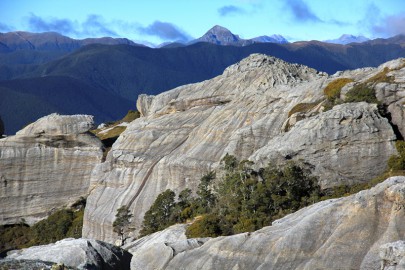 The term “quartzose rocks” applies to sedimentary rocks comprised primarily of quartz particles. They are very acidic (low pH) and mostly in areas of high rainfall, making them very infertile. Cliffs and scarps are steep faces on hill slopes and ridges and dropping to valleys, whereas tors are steep-sided upstanding outcrops sitting atop other landforms such as ridges. They provide habitats ranging from bare rock holding little moisture in highly exposed situations and colonised only by mosses and lichens, to deeper moist soils in heavily shaded and sheltered habitats supporting hebes, epacrids and other heath-like shrubs and flax. Native species that have been lost from neighbouring habitats because of animal browse find refuge on cliffs, scarps and tors.

Compared with on more fertile rock types, the number of species on these landforms is relatively few and no threatened plants are recorded. Landscapes on the West Coast with these steep features are habitats for several endangered snails (Powelliphanta spp.) but these animals are largely confined to gentler slopes. Otherwise, threatened and rare fauna are unknown.

Communities on cliffs scarps and tors of quartzose rocks are vulnerable to competition from exotic weeds. However, as they are generally very infertile, the number of species is limited. Rock climbing can have an impact on some cliffs and outcrops. Browsing impacts from goats, deer, possums and rodents are likely to be present in some sites. Cliffs and outcrops are largely naturally sparsely vegetated and erosion would have always been part of their landscape dynamics.

Quartzose rocks are common in western Nelson and the West Coast in association with other sediments including coal measures, i.e. Garibaldi Ridge and Mt Rochfort.