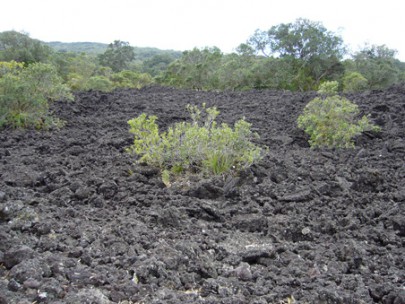 Recent lava flows are recent very coarse deposits of acidic or basic volcanic rock that has issued from a volcano or fissure in the Earth’s surface in fluid form and then solidified. On Rangitoto Island, lava flows are almost completely colonised by pohutukawa (Metrosideros excelsa). The youngest lava flows, such as those on Mt Ruapehu, support only mosses and sparse alpine herbs.

There are no threatened or rare fauna associated with this system, although Rangitoto Island once had a flourishing avifauna which might be partially restored (Miller & Craig 1994).

The main weed on Rangitoto is evergreen buckthorn (Rhamnus alaternus), but moth plant (Araujia hortorum) is an increasing problem on all offshore islands of the Hauraki Gulf. Broom (Cytisus scoparius) has the potential to be a bad weed on the mainland volcanoes. Possums are a threat to Rangitoto, but are unlikely to be significant on the other mountainous lava flows.

Nichol R 1992. The eruption history of Rangitoto: reappraisal of a small New Zealand myth. Journal of the Royal Society of New Zealand 22: 159-180.