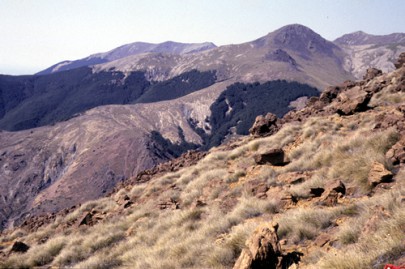 Hills refers here to the slopes, ridges, and summits rising above the surrounding country. Ultrabasic (also known as ultramafic) rocks contain very little quartz or feldspar and are composed essentially of ferromagnesium silicates, metal oxides, and native metals (Anon, 1962). They form soils with low concentrations of major nutrients and high concentrations of toxic metals such as nickel, chromium, and cobalt. These soil conditions result in vegetation that is often characterised by stunted, slow growing, small-leaved trees and shrubs. Plants characteristic of fertile soils can be present, but these sites also support ultrabasic endemics and ecotypes of widespread species. At low altitudes, the ultrabasic influence on vegetation can be obscured because of human burning resulting in manuka-dominated shrublands. These landscapes also have limited areas of ultrabasic boulderfields and ultrabasic screes. While the process is not unique to ultrabasic rocks, the oxidation of the ferromagnesium minerals in these rocks produces the red coloration after which the geographical features are named e.g. Red Hills.

We have found no information on threatened and rare fauna specific to this ecosystem.

Ultrabasic soils exclude the majority of species, including exotic weeds, but wilding pines, particularly lodgepole pine (Pinus contorta) and Douglas fir (Pseudotsuga menziesii), are very invasive. Hawkweeds (Hieracium spp.) and briar (Rosa rubiginosa) are of concern on the Red Hills Ridge. Deer and possums are widespread while goats and pigs are locally common in Nelson-Marlborough. Historically, some areas of serpentine were mined (e.g. Cobb Valley asbestos mine) but there are no mines currently in operation. In the 1970s and 1980s proposals to mine asbestos from the Red Hill Range in Southland generated much controversy and eventually led to the incorporation of this area into Mount Aspiring National Park. Ultramafic hills tend to be support open scrubland and grassland, which is susceptible to fire. Many sites have been burnt historically for grazing and are susceptible to further fires, especially in the drier areas of Nelson Marlborough. Ultramafic soils are unsuitable for agriculture but some near Red Hills Ridge have been planted in pines and this has increased the risk of fire.