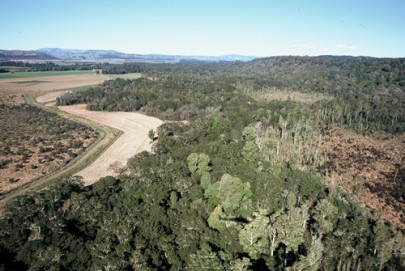 Frost hollows are found on terrace or valley floors where, in suitable conditions, cold air accumulates during the night as a result of cold air drainage called katabatic wind. Such regions are subject to a greater incidence of and more severe frosts than are the surrounding sloped areas. Frosts are severe enough to prevent the establishment of many plant species that are common in the surrounding forest vegetation. These sites are often associated with poor drainage, increasing the environmental challenges for plant establishment and growth. The vegetation is more likely to comprise scrub such as weeping matipo (Myrsine divaricata) and manuka (Leptospermum scoparium), and heart-leaved kohuhu (Pittosporum obcordatum) and particularly of divaricating species of Coprosma (e.g., C. obconica, C. pedicellata, C.wallii), sometimes with taller species such as narrow leaved lacebark (Hoheria angustifolia), pokaka (Elaeocarpus hookerianus), and stunted individuals of taller trees such as silver beech (Lophozonia menziesii) and kahikatea (Dacrycarpus dacrydioides). Herbaceous plants and bryophytes are often important. These sites have been considered to represent inverted treelines. The terms ‘frost pocket’, ‘frost flat’, or ‘cold pools’ may also be used for this ecosystem, but they are not to be confused with Strongly leached terraces and plains in the South Island nor Old tephra plains (=frost flats) in the North Island.

Frostiness may reduce weed threats, but frost hollows on South Island flats in wetter areas such as the upper Buller Valley are threatened by blackberry (Rubus fruticosus) while drier sites may be threatened but mouse-ear hawkweed Pilosella officinarum [Hieracium pilosella] and pines, particularly contorta pine (Pinus contorta). Alluvial sites tend to have fertile soils and easy topography suitable for agriculture; many have been destroyed in the latest round of dairy conversions. There is limited quantitative information on animal impacts. Vegetation on fertile soils tends to be preferred by herbivores. Soils range from naturally very well drained to ponded. This easy topography encourages recreational use.

In the South Island they are associated mostly with broad river valleys. Note, that in the North Island similar systems are represented mainly by old tephra plains (= frost flats) on the Volcanic Plateau (Smale 1990), except that the latter occur in areas with seasonally fluctuating water tables.