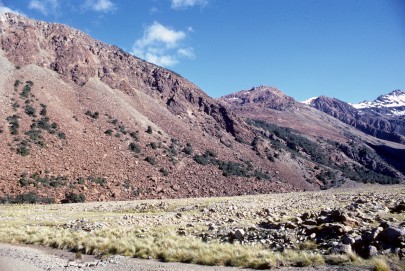 Ultrabasic rocks contain very little quartz or feldspar and are composed essentially of ferromagnesium silicates, metal oxides, and native metals (Anon 1962). They produce soils with low concentrations of major plant nutrients and high concentrations of toxic metals such as nickel, chromium, and cobalt. Screes are the accumulation of course debris, ranging from gravel (2-64 mm) and cobbles (64-256 mm) to patches of boulders (> 256 mm) mantling slopes (often in association with protruding in situ bedrock). Screes have also been referred to as 'shingle slides' (Fisher 1969). Slopes are generally somewhat below the natural angle of repose of about 32 degrees. Screes are often armoured on the surface with large fragments overlying finer particles that provide a rooting medium for plants. Screes can form under a forest canopy in some situations but this ecosystem comprises mostly openland above treeline. These conditions result in vegetation that is often characterised by stunted, slow growing, small-leaved trees and shrubs. Plants characteristic of fertile soils can be present, but these sites also support ultrabasic endemics and ecotypes of widespread species e.g., sun orchids (Thelymitra pauciflora).

Ultrabasic screes exclude the majority of species, including exotic weeds, but invasion by pines (Pinus spp.) and Douglas fir (Pseudotsuga menziesii) is of concern on the Red Hills Ridge in Marlborough. They offer no potential for agriculture and are too remote to be influenced by development on adjacent land other than forestry plantations in Marlborough. Historically, some areas of ultrabasic rocks were mined and they are still potentially threatened by this activity. Shrubland on the scree margins is susceptible to fire especially in drier interior sites (Red Hills/Richmond Range).

There are very limited areas of screes on ultrabasic rocks in Nelson-Marlborough on Red Hills Ridge, and in South Westland on Little Red Hill at the head of the Barrier River and on the western side of the Olivine Range. It is worth noting that some references in the literature to screes on ultrabasic rock do not fit our definition where the substrate is merely loose rock or stones over consolidated bedrock (e.g. Dun Mt., Nelson).