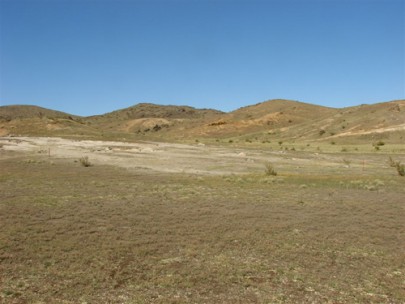 Inland saline ecosystems are areas of soil where in the absence of leaching, soluble salts have accumulated to such an extent that they are moderately to highly alkaline (pH > 7). Saline soils accumulate from the weathering of several geological substrates: basement schist, ancient marine or lake sediments, and old alluvial gravels. Because saline soils occur in semi-arid climates where evaporation of soil moisture leads to surface accumulation of salts, they occur patchily across this zone from the mid altitudes of Otago’s block mountains down to basin and valley floors. Surface salts are predominantly a grey-white colour but yellow and pink tinges are frequent. Because the accumulated salts are toxic to most plants, saline soils generally support sparse, mostly herbacerous, vegetation. A range of herbs more characteristic of coastal estuaries and lagoons dominate the limited flora such as Lilaeopsis novae-zelandiae, Oxybasis ambigua, native celery (Apium prostratum subsp. prostratum var. filiforme), Selliera microphylla and Buchanan’s orache (Atriplex buchananii).

Threatened lichens include the nationally endangered Buellia epigaea, known only from one inland saline site in Central Otago, and nationally vulnerable Acarospora murorum.

They have a small but distinctive Lepidoptera fauna a species in the genus Loxostege (Crambidae), Paranotoreas fulva (Geometridae) that is restricted to Central Otago and two species, Scythris triatma (Scythrididae) and Kiwaia thyraula (Gelechiidae) that appear to be typical of salt-pans in parts of Central Otago.

Most sites have been destroyed by extensive pasture and irrigation development. There are relatively few weeds, but buck's horn plantain (Plantago coronopus) and several barley grasses (Hordeum spp) are serious threats to the relictual native flora on many patches. Many sites are grazed by stock, and rabbits graze on rare plants and erode others with their burrowing. Soil aggregate stability is low and consequently the potential for wind and stormwater erosion is high.

Inland saline ecosystems occur in localised areas of Central and northern Otago, particularly in the Lower Manuherikia valley, on the Maniototo Plain, and in the Clutha valley south-west of Alexandra.