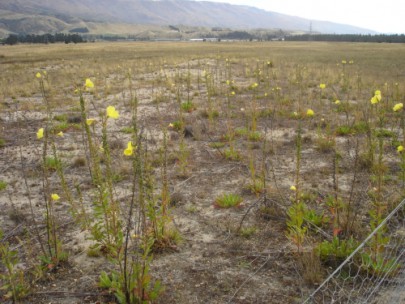 This ecosystem comprises non-volcanic dunes formed inland from river sand. As such, these dunes have never been influenced by coastal processes. Included here are only active or semi-active dunes with raw or recent soils with no well-developed soil horizons. Except for some planted exotic marram grass (Ammophila arenaria), inland dunes support no specialised sand-binders, being colonised by the same species that colonise riverbed sand, such as scabweeds (Raoulia spp.) and silver tussock (Poa cita) (see Fig. 6 in Watt 1979). Volcanic dunes are described separately.

Sand hills, may include sand plains

Threatened and rare plants include dwarf woodrush (Luzula celata), which is in serious decline. The endangered Cromwell chafer beetle (Prodontria lewisii) is confined to one site near Cromwell.

Most areas in Canterbury and Otago have been converted to agriculture or forestry; in the 1920s these ‘useless sand wastes’ were considered a ‘menace’ to adjacent fertile lands and were deliberately planted for stabilisation. Some locations have been destroyed by or are at risk due to hydro development. Exotic weeds are a major threat; pines (Pinus spp.) have invaded dunes adjacent to Lake Tekapo, while the Cromwell Chafer Beetle Reserve, where rabbit grazing has been severe, is now dominated by sweet vernal (Anthoxanthum odoratum), sheep’s sorrel (Rumex acetosella) and haresfoot trefoil (Trifolium arvense) (Ferreira & McKinlay, 2000). Human modification of the dynamics of braided rivers has also altered the capacity of rivers to supply sediment to adjacent land to form the dunes.

Inland sand dunes are best developed in the upper Clutha and upper Waitaki basins of Central and North Otago, and also in the Ashburton, Rakaia, Rangitata, and Waimakariri valleys of Canterbury. The large sand dunes at Mason’s Bay, Stewart Island, may also possibly qualify.

Cockayne L 1911. Report on the dune-areas of New Zealand, their geology, botany and reclamation. Wellington, Department of Lands. 76 p.