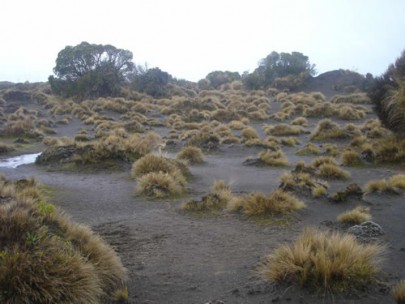 Volcanic dunes comprise drifting sand (0.06 - 2mm) derived from lahar and tephra deposits that accumulate on volcanic ring plains during major eruptive phases and are reworked by aeolian and fluvial redistribution during intervening quiescent periods. These processes have led to dune formation, in both sheltered positions and where plants have arrested the drift of sand, and associated deflation (lag) surfaces. The ‘hummock dunes’ tend to be low and isolated from one another, in chaotic systems of mounds and hollows and occur within a matrix of lag gravel. Despite adequate rainfall (>1200 mm/year), the very windy climate, low humidity and coarse, gravelly and sandy soils have produced a drought-prone desert-like environment.

While other dunes in western North Island are originally derived from volcaniclastic material the proportion that is of laharic origin is minor and these dunes are mostly influenced by coastal processes. They are therefore included in Active sand dunes. The Inland sand dunes of the South Island are formed from non-volcanic material.

Volcanic dunes are restricted to the Rangipo ‘Desert’ on the south-eastern fringe of Mt Ruapehu on the Volcanic Plateau in the central North Island.

Cockayne L 1911. Report on the dune-areas of New Zealand, their geology, botany and reclamation. Wellington, Department of Lands. 76 p.

A day in the desert (The World According to me)

In the Shadow of Giants (New Zealand Geographic)

The volcanic dunes of the Central Plateau (Department of Conservation)