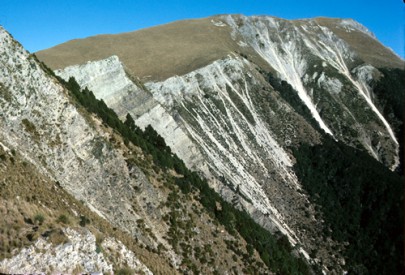 Cliffs are high steep faces and scarps are cliffs along the edge of a plateau, while tors are mounds of glacial eroded bedrock with steep sides. Together, they provide many varied habitats - from bare rock that can be colonised only by mosses and lichens to deeper soils supporting woody vegetation, from highly exposed situations to heavily shaded and sheltered habitats, and from very dry to permanently wet surfaces. Hebes, some heath-like shrubs, flaxes and native grasses are important on cliffs. Plants seldom grow on the massive cliff faces but are rooted within the instices of ledges, crevices, and cracks. Long tap-like roots are a noteable trait of limestone cliff plants such as cheesemanias and pachycladons. Many native shrubs, grasses, and herbs that have been lost from neighboring habitats find refuge on cliffs, scarps and tors. Some limestone outcrops are important sites of both ancient depositional fossils and New Zealand biota that has become extinct since humans arrived.

Threatened fauna include the nationally vulnerable black-eyed gecko (Mokopirirakau kahutarae) which is rare on the Arthur Range.

Limestone areas are particularly favoured by grazing animals because of the high mineral content of the foliage. Grazing is a major threat, particularly where goats, and even possums are present, because they can often access cliffs. Exotic weeds are less of a threat on extremely steep slopes because instability ensures fresh sites for native species colonisation. However, stability combined with sufficient fine material can allow exotic thistles, nutrient demanding grasses such as Chewing’s fescue (Festuca rubra), Scotch broom (Cytisus scoparius) and old mans beard (Clematis vitalba) to establish. Introduced pest and diseases of Brassicaceae (cabbage family) threaten some native members of this family, e.g. Pachycladon cheesemanii although weeds are a greater threat. Some sites are threatened by quarrying for agricultural lime and road gravel, e.g., dolomite mining at Mt. Burnett in North West Nelson. Steep limestone habitats are also vulnerable to development for wind farms, as at Mt. Cass, Canterbury.

Calcareous cliffs occur within most limestone, marble, and dolomite outcrops throughout the North and South Islands. Significant locations include: western Waikato, Hawke Bay (Te Mata Peak); Wairarapa (in the Ruamahanga Valley); Marlborough (on the Chalk Range, Sawcut gorge in the Waima valley, and in the Leatham Valley); western Nelson (on Mt. Burnett, the Matiri Range, and Mt. Owen); Canterbury (in the Castle Hill basin and Pareora River); Otago (throughout north Otago and south Canterbury either side of the Waitaki River in the Waitaki Valley at the Awahokomo Karstland).

Brown JA, Smith ANH, Robinson TJ 2008. The response of rare herbaceous plants to the removal of weeds in an unproductive environment. Community Ecology  9: 53–58.