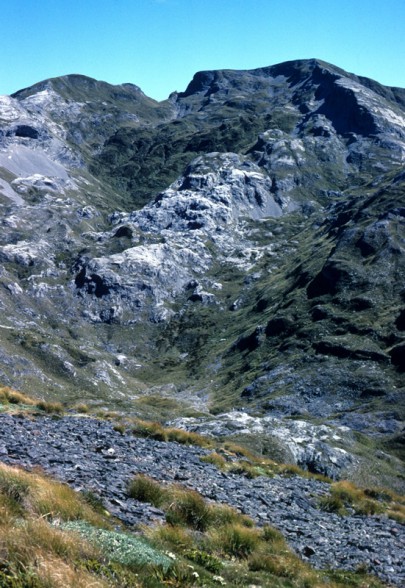 Boulderfields occur where deposits of large (> 0.25m) fragments of fallen detritus accumulate on slopes. Calcareous rocks in New Zealand are primarily limestone and marble. As the calcium carbonate of the interstitial fines tends to dissolve (solution weathering), stabilized boulderfields have few or no fines between the boulders, making it difficult for plants to establish. For many years, lichens and mosses may be the only colonists. With time, calcareous boulderfields may be invaded from the margins by mat-forming plants or those spreading vegetatively. Pockets of fines can provide shaded mesic habitats that allow herbaceous plants to persist. Boulderfields provide fire breaks that allow remnants of vegetation to persist in fire-modified landscapes. There are many forms of limestone debris, and fine debris tend to support more species than boulderfields per se.

Montane calcareous boulder fields are invaded by herbaceous weeds such as thistles (Cirsium spp.) and high polyploid grasses, Chewings fescue (Festuca rubra), meadow grass (Poa pratensis) and cocksfoot (Dactylis glomerata) on the margins and small pockets of fines. At lower altitudes, calcareous boulder fields are very vulnerable to vines such as Old man’s beard (Clematis vitalba) and banana passion vine (Passiflora spp.). Browsing animals (goats, deer, chamois, hares, and possums) are likely to be present in some sites. Mining may pose a threat, but only at lower altitudes.

In North Island there are very limited calcareous boulderfields, associated with calcareous coastal cliffs in eastern Wairarapa at Castle point. In the South Island they are most abundant on the Arthur Range and Matiri Range, the escarpments of the Matiri Plateau, and to a lesser extent on Garibaldi Ridge, all in western Nelson. Also the Chalk Range in Southern Marlborough, in the Castle Hill basin of the Waimakariri River.