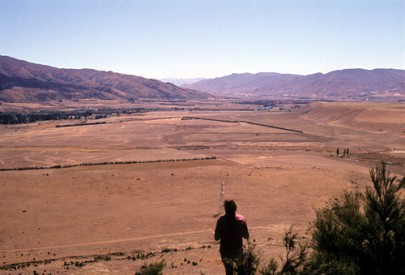 Outwash deposits earlier than the late-Otiran period are often overlain with loess. At locations where wind deflation has removed this loess, the surfaces equate ecologically with the late-Otiran surfaces described above. Later (post-glacial) deposits are higher in nutrients and have more heterogenous soil conditions.  As such, they are excluded from this definition.

Weed invasions are a major threat, mainly wilding pines (Pinus spp.), sweet briar (Rosa rubiginosa), broom (Cytisus scoparius), Russell lupin (Lupinus polyphyllus) and stonecrop (Sedum acre). The natural values of this system are being destroyed in particular by viticulture and residential subdivision in Central Otago, and irrigation and cultivation in the upper Waitaki. Sites are susceptible to grazing by stock, rabbits and hares. There is some mining activity in the Nevis Valley and damage by off-road vehicles in some areas.

They are best developed in the Mackenzie Basin, Canterbury, the upper Clutha and upper Waitaki basins of Central and North Otago, and also in the Ashburton, Rakaia, Rangitata, and Waimakariri valleys of Canterbury. Smaller areas are found in the foothill valleys of rivers such as the Mataura and Pareora.