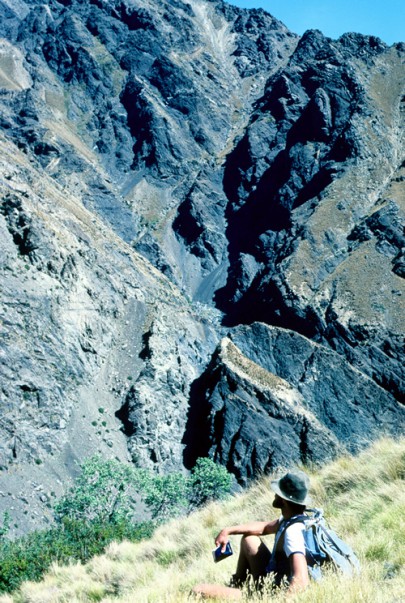 Acidic rocks range from soft mudstones to indurated greywacke sandstones, plutonic rocks such as granite, and rhyolite. They are relatively infertile compared with basic and calcareous rocks. Cliffs and scarps are steep faces on hill slopes and ridges and dropping to valleys, whereas tors are steep-sided upstanding outcrops sitting atop other landforms such as ridges. They occur over a wide altitudinal range from the lowlands to the alpine zone. They provide habitats ranging from bare rock holding little moisture in highly exposed situations and colonised only by mosses and lichens, to deeper moist soils in heavily shaded and sheltered habitats supporting taller plants, including trees and shrubs where these can maintain a foothold. Hebes, epacrids and other heath-like shrubs and flax often predominate in the subalpine zone, with specialised herbs at higher altitudes. Native species that have been lost from neighbouring habitats because of animal browse find refuge on cliffs, scarps and tors.

The nationally vulnerable black-eyed gecko (Mokopirirakau kahutarae) occurs on the eastern Marlborough Mountains. The alpine scree weta (Deinacrida connectens) can also be found on cliffs. The rare and nationally endangerd rock wren (Xenicus gilviventris) commonly nests on cliffs as does the endangered kea (Nestor notabilis). Landscapes on the West Coast with these steep features are habitats for several endangered snails (Powelliphanta spp.) although these animals are found on a wider range of slopes.

Communities on cliffs scarps and tors of acidic rocks at lower altitudes are vulnerable to competition from exotic weeds, especially gorse (Ulex europaeus) and broom (Cytisus scoparius). Cotoneaster spp. are also spreading into these habitats. However, as these are generally infertile, the number of invasive species is limited. Rock climbing can have an impact on some cliffs and outcrops. Browsing impacts from goats, deer, possums and rodents are likely to be present in some sites. Cliffs and outcrops are largely naturally sparse and erosion would have always been part of their landscape dynamics.

Cliffs, scarps and tors of acidic rock occur throughout the New Zealand mountains including the volcanic mountains of the central North Island. They are particularly common along the Main Divide in the South Island.