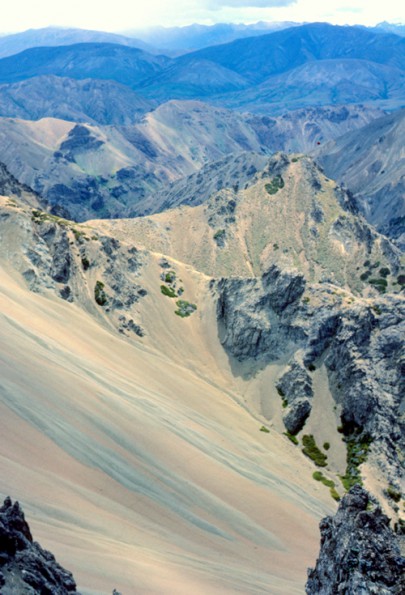 Screes comprise loose, mobile rock, mostly smaller than boulders, lying on steep slopes (30-40°). Although in some situations screes can form under a forest canopy, mostly they occur as open land. This parent rock category includes the most common rock types of the axial ranges of the North and South Island. Most screes are long-standing features and have existed since the Holocene and the position of their boundaries has been shown to be remarkably static. Stable scree patches support scattered individuals of herbaceous species such as Epilobium glabellum and Poa novae-zelandiae, and an assortment of obligate scree plant species. Some authors divide screes into 'rock-slides' comprised of relatively stable areas of larger rocks and 'shingle-slips' comprising small, fine-grained, usually mobile stones, 2-4 cm in diameter or occasionally up to 10-cm diameter. Scree mobility can be indicated by lichens.

Introduced pines are the main weed threat. Adventive legumes and alders are spreading on some moist screes. Trampling and browsing impacts by introduced mammals (goats, deer, tahr, chamois, hares, possums and rodents) are likely to be present in some sites. Modification of alpine areas around ski resorts can be a threat. Overcollecting of unique scree plants has resulted in local extinctions.

Screes on acidic rock are most common on the dry greywacke mountains of the South Island ranging from Marlborough to North Otago, but also occur in NW Nelson, the Richmond Range and Inland Southland and on the North Island in the Kaweka, Kaimanawa and Ruahine ranges. Scree-obligate plants occur more commonly on screes in dry climates.

Fisher FJF 1952. Observations on the vegetation of screes of Canterbury, New Zealand. Journal of Ecology 40: 156-167.

Wardle P 1972. Plant succession on greywacke gravel and scree in the subalpine belt in Canterbury. New Zealand Journal of Botany 10: 387-398.