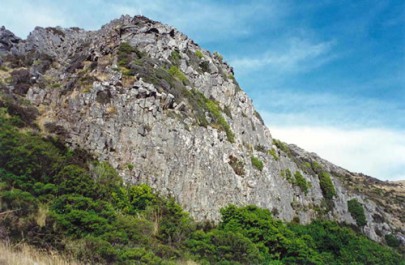 These cliffs, scarps, and tors occur inland on tuffaceous sandstones and mudstones, andesite, diorite, basalt, and gabbro. Plant species are tolerant either of shallow soils, full sunlight, and intermittent drought, or damp and shady crevices. They are either restricted to the low-competition environment of these habitats, or derived from the surrounding matrix and able to survive in the harsh conditions.

Threatened and rare fauna include the Canterbury gecko (Hoplodactylus aff. maculatus ‘Canterbury’), the spotted skink (Oligosoma lineoocellatum), the Banks Peninsula tree weta (Hemideina ricta; although it is likely that they only occupy refuges amongst rocks in situations where they face a shortage of refuges in trees or logs) and two narrowly distributed lichen-feeding beetles (Artystona wakefieldii and A. rugiceps).

Basic cliffs, scarps, and tors occur throughout the North Island and are especially prominent in Northland and the Coromandel Peninsula. In the South Island they occur on Banks Peninsula, the Otago Peninsula, and at scattered locations in western Southland, eastern Otago, south Canterbury, central Marlborough and NW Nelson.