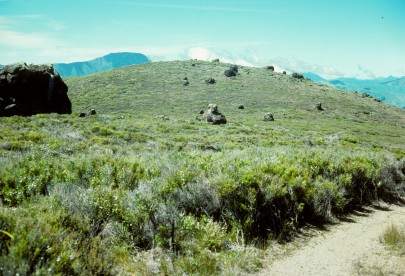 Cliffs are very steep to perpendicular or overhanging rock faces, while scarps are relatively steep slopes that break the continuity of the land, e.g. along the margin of a terrace. Ultrabasic (also known as ultramafic) rocks contain very little quartz or feldspar and are composed essentially of ferromagnesium silicates, metal oxides, and native metals (Anon. 1962) that weather to soils with low concentrations of major nutrients and high concentrations of toxic metals such as nickel, chromium, and cobalt. These soil conditions result in vegetation at treeline and below that is characterised by stunted, slow-growing, small-leaved trees and shrubs. Cliffs and scarps provide habitats ranging from bare rock, holding little moisture in highly exposed situations and colonised only by mosses and lichens, to deeper moist soils in heavily shaded and sheltered habitats supporting hebes, epacrids, and other heath-like shrubs and flax. Plants characteristic of fertile soils can be present, but these sites also support ultrabasic endemics and ecotypes of widespread species. Native species that have been lost from neighbouring habitats may find refuge on cliffs and scarps.

We have no information on threatened and rare fauna specific to this ecosystem.

Communities on cliffs scarps and tors of ultrabasic rocks are vulnerable to competition from exotic weeds, particularly pines. However, as they are generally very infertile the number of species is limited. Browsing impacts from goats, deer, possums and rodents are likely to be present in some sites. Cliffs and outcrops are largely naturally unvegetated and erosion would have always been part of their landscape dynamics. Cliff vegetation by its nature is not generally threatened by agriculture because the soils are unsuitable. Some ultrabasic hills have experienced mining. Recreation is not a threat due to the remote locations.

There are only limited areas of cliffs and scarps on ultrabasic rocks. They occur in Nelson-Marlborough (Red Hills Ridge on the Richmond Range, Bryant Range, D’Urville Island), south Westland (Red Hills Range) and inland Southland (Eyre and Livingstone mountains). In the North Island, ultrabasic cliffs occur only on the coast at Surville Cliffs, Northland.