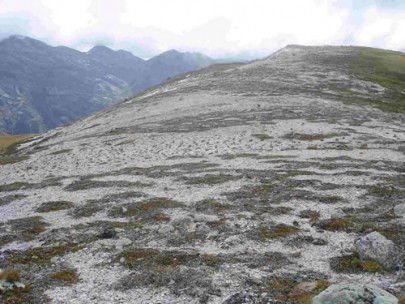 Granitic sand plains are indistinguishable from granitic gravel fields and they occur together on very exposed sites above treeline, where erosion-prone granite bedrock is close to the surface. Typically, 80% of the site cover is bare ground and bedrock. Due to their chemistry and structure, these granites crumble and rot to form angular gravels (2-64 mm) and ultimately sands. Relative to other alpine granite ranges in New Zealand, rainfall is relatively low and the terrain is flatter, differentiating them from screes on steeper slopes. Soils are well-drained and excessively nutrient-poor.

Only one rare plant, the naturally uncommon cream gentian (Gentianella luteoalba), is known from this system and it is endemic to the Lookout Range.
The NW Nelson sites support a rare carabid beetle (Mecodema integratum) and screefields adjacent to the plains provide habitat for the range-restricted giant scree weta (Deinacrida connectens). In Fiordland the new moth species (Hierodoris extensilis) Hoare (Lepidoptera: Oecophoridae) can be found in granite sand plains and gravel fields.

This system does not appear to be threatened, however, invertebrates are threatened by mammalian predation.

The extent of granite sand plains is not well known, but they may be confined to the Lookout Range, NW Nelson, and Mt Titiroa in eastern Fiordland. They may also occur in the NE Paparoas where suitable granites occur above treeline, but this area has not yet been surveyed.