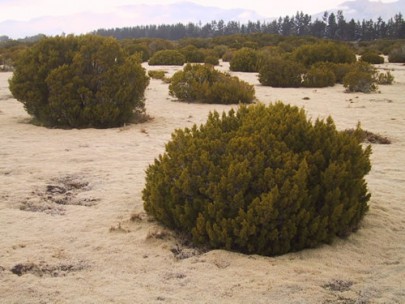 These ecosystems comprise terraces, outwash plains or dry shingle fans of glacial or fluvial-glacial origin. They are colloquially referred to as ‘Wilderness’ and sometimes erroneously referred to as ‘frost flats’. Strongly leached terraces and plains have unusually low soil fertility for their elevation, and so have been described as examples of early post-glacial succession arrested because of low fertility (Molloy 1975). They are frequenty free-draining and experience cold winters (high incidence of frost) and hot summers (seasonal drought). Bog pine (Halocarpus bidwillii) is diagnostic, forming scattered clumps surrounded by a matrix of mat-forming vegetation or moss/lichenfields.

The rare moth Ericodesma cuneata (Tortricidae) has been found quite commonly at The Wilderness, Southland; larvae are on Corokia.

All known sites are restricted to the southern and eastern South Island, in the Mavora, Mackenzie, Molesworth, and Puketeraki Ecological Regions.