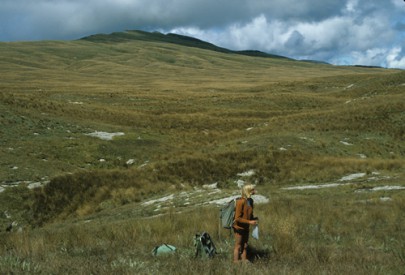 Erosion pavements are flat to gentle slope areas that have been bared of topsoil formed through chemical weathering. They may or may not have large cracks and fissures, depending on rock type, that do not support gravel or colluvium and occur on ridges, mountain tops and plateaux rather than on tors or rock stacks. They do not include coastal turfs, even where these occur on coastal erosion pavements. They range in size from small inter-tussock spaces to patches many metres across. They commonly support only small appressed herbs, e.g., Craspedia spp., Epilobium spp., Raoulia spp.

No information is available on threatened and rare fauna.

Introduced gasses and flatweeds can be invasive, especially along fissures and cracks. Grazing by deer or large mammals is likely to be a problem only where there is sufficient foliage, but hares have been noted eating even individual plants in the middle of pavements. Ironically, as described above, farming and stock grazing have probably increased the overall area of limestone erosion pavement. As with all limestone features, mining can be an issue.

They are scattered through the South Island lowlands in association with Amuri limestone from south Marlborough to north Otago, wherever the regolith has been stripped by water and wind. They have probably dramatically increased in frequency and area since humans arrived, due to grazing and burning. Most lowland limestone escarpment in dry eastern South Island have their upper margin, convex creep slopes stripped of their previous regolith to expose an underlying pavement They are particularly common on the subalpine limestone plateaux of western Nelson.