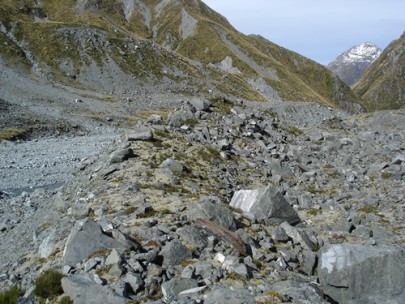 Moraine is an accumulation of detritus deposited by glacial action and often having some topographical linear shape. Particle size varies greatly and those with boulders are distinguished from boulder fields only by their mode of formation. Included here are only those with well-drained raw-recent soils lacking vegetation other than mosses and lichens or with scattered herbs or shrubs.

Rare and threatened plants include (potentially) the nationally critical Brachyscome pinnata, naturally uncommon Graham’s buttercup (Ranunculus grahamii), declining Ranunculus pilifera and the recovering yellow alpine buttercup (Ranunculus godleyanus). While it is not threatened, the little moth Dichromodes sp. ‘plain grey’ feeds on crustose lichens and is restricted to stony habitats such as moraines.

Moraines are open to invasion from exotic herbs and woody weeds. Many areas are remote and most are protected by the Department of Conservation. Browsing impacts from ungulates, particularly tahr and chamois, have been severe in the past, and these animals are still abundant in some areas. Browsing by hares is ongoing. Most moraines are unproductive and no attempts have been made to drain and farm them, but those at lower altitudes such as the Mackenzie Basin are vulnerable to farming. Some alluvial gold mining has occurred on low elevation moraines on the West Coast but most are too high in elevation. Moraines with open land or shrub are susceptible to fire on the drier eastern side of the Southern Alps. Possibly some damage on a local scale may have been caused by tourism.

Moraines are present in most of the major valleys on both sides of the Southern Alps, e.g. Waimakariri, Rangitata, Tasman, Ohau, and Dart valleys in the east, and Whataroa, Cook, Fox, Paringa, and Landsborough valleys in the west. Thus, moraines are one of those systems included despite their possibly not being strictly rare.

Glaciers and glaciation (Te Ara, The Encyclopedia of New Zealand)