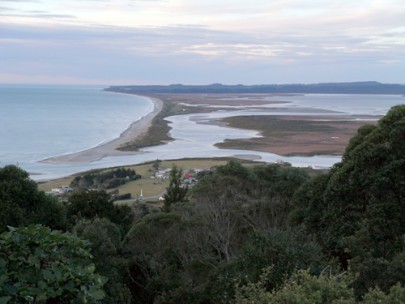 In the broadest sense, a lagoon is a shallow lake that is intermittently connected with a river, a deeper lake, or the sea. In New Zealand the term is applied mostly to coastal lagoons impounded behind barrier beach ridges, usually in association with a river or stream mouth, and is used in that sense here. Their salinity ranges from almost fresh water, through brackish, to almost pure sea water and it can change over time. The depth and salinity of many lagoons are influenced by tidal movement. The barrier bars are often not permanent but are formed and re-formed by wave action, flooding rivers, or a combination and changes are often associated with storm events. Lagoons range in extent from less than a hectare to hundreds of hectares. Lagoons also form behind coral reefs but these are not found in New Zealand.

Weed invasion is high, several salt-tolerant weeds, e.g. grasses such as Puccinellia spp., sickle grass (Parapholis incurva), tall fescue (Schedonorus phoenix), creeping bent (Agrostis capillaris). In the north, kikuyu grass (Pennisetum clandestinum), buffalo grass (Stenotaphrum secundatum) and saltwater paspalum (Paspalum vaginatum) are common. Many exotic herbs are present on lagoon margins, e.g. Aster subulatus. Lagoon margins are a fragile system and the greatest threat to unfenced lagoon margins is grazing and trampling by domestic and feral animals. There are potential problems of nutrient enrichment from fertiliser and stock and from urban runoff into lagoons close to human settlements. Logging in the headwaters threatens some lagoons although this is now largely historical. Lagoon systems under greatest development threat are near centres of population. There is little threat from on-site erosion because this occurs naturally anyway, but it is influenced by upper catchment erosion, and river flooding, which can be related to human activity. Smaller lagoons are under greatest threat from drainage of their headwater supply streams. Also unnatural opening of bars across lagoon mouths when lagoon levels are high, to alleviate flooding of adjacent agricultural land, can be damaging. Damage by off-road vehicles can be severe and demand for access high because of the recreational value of lagoons.

Coastal lagoons are found throughout New Zealand. They are less common in Fiordland because of the steep topography.