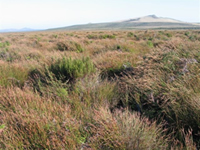 Domed bogs (Sporadanthus) are raised bogs dominated by Sporadanthus ferrugineus or S. traversii, members of the family Restionaceae. The restiad species are the primary peat formers (as opposed to Sphagnum mosses) and the bogs typically develop extensive convex domes raised above the local topography. A limited suite of species are tolerant of the waterlogged, low-nutrient and acidic conditions. Gleichenia dicarpa is a common associate of both Sporadanthus bog types, whereas Empodisma minus (also a restiad), Leptospermum scoparium, and Epacris pauciflora grow only in the S. ferrugineus type, and Dracophyllum scoparium and Olearia semidentata are confined to the S. traversii type.

The northern North Island bogs have been extensively drained and converted to pasture, so very little of the original resource remains. This is mostly legally protected although peat mining occurs on a small portion of privately owned land, and adjacent drains have ongoing impacts on regional water tables. Accidental fire is another major threat. The Chatham Island bogs are more intact but are increasingly under threat of clearance and pasture development, fire, drainage, stock grazing, and nutrient enrichment via fertiliser drift. Weed problems include the invasion of margins by grey willow (Salix cinerea) in the Waikato, and strawberry myrtle (Ugni molinae) on the Chatham Islands. Here too, the peats have been investigated for their high wax content and they face the threat of mining.

Domed bogs with Sporadanthus ferrugineus were once common in the northern North Island, but they are now confined to three sites in the Waikato region. In contrast, S. traversii bogs are endemic to and widespread on Chatham Island.

Campbell EO 1964. The restiad peat bogs at Motumaoho and Moanatuatua. Transactions of the Royal Society of New Zealand, Botany 2: 219-227.