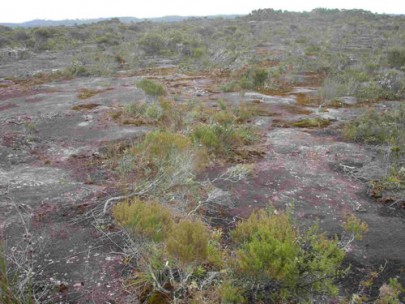 Gumlands are a subset of heathlands, which can occupy a much wider range of soils, altitudes and hydrological conditions.

There are also undescribed orchids, an undescribed Prasophyllum, and several undescribed Thelymitra species with the tag names 'Ahipara', 'Rough leaf', 'Sky', and 'Darkie'. Gumlands are the only known habitat for some of these. Their abundance has decreased in recent times as disturbances needed for their establishment have declined and woody species have increased.

Worldwide, gumlands are known to be important habitats for Lepidoptera, and NZ gumlands are no exception; they harbour more than 160 species. It is unlikely that any Lepidoptera species are restricted to gumlands, but two undescribed species in the genera Megacraspedus and Paramorpha have never been collected elsewhere.

Most gumlands have been lost to agricultural and urban development, both of which are continuing. Remaining sites are vulnerable to a suite of woody weed species, such as Hakea sericea, H. gibbosa, and gorse (Ulex europaeus). In some areas, there are problems with off-road drivers, motorcyclists, and dumping of rubbish and fertiliser drift from adjacent agriculture is a likely threat. Wind farm development may pose a future threat.

Gumlands are restricted to the northern North Island, from Auckland to the Far North.