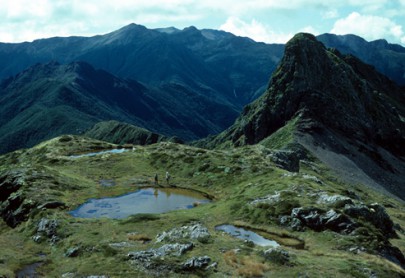 Tarns are small mountain and high country lakes. They form mainly in association with glacial features such as cirque basins and kettleholes, and on a wide range of erosional landforms such as small fault scarps and slumps. Low turfs frequently form at their margins and extend from the lowest water level to where vegetation more characteristic of the surrounding environment occurs (i.e. forest, tussock grassland). Species range from facultatively aquatic, through to terrestrial species with short life cycles or some tolerance of submergence. The number of aquatic species decreases with increasing altitude. Local vegetation composition reflects primarily altitude and the duration and frequency of inundation.

Because of the altitude and isolation of alpine tarns, most are not threatened apart from browsing and trampling by feral ungulates. In eastern areas such as Marlborough where they occur above farmland they are often heavily browsed and trampled by cattle and also by Canada geese. Tarns on moraines in valleys east of the Main Divide, such as the upper Ashburton and Rangitata catchments, and Mackenzie Basin, are vulnerable to the effects of farm development, particularly trampling from stock, eutrophication from runoff, and weed invasion of their margins. Tarns on the Denniston Plateau are threatened by proposed mine footprint areas.

Tarns are present in most New Zealand mountains and some inland basins east of the South Island Main Divide.