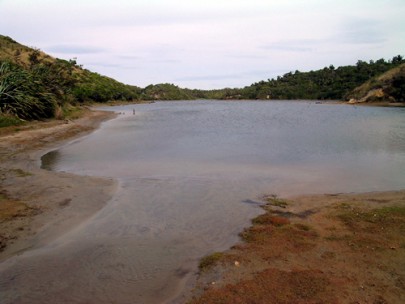 Lakes have been arbitrarily defined as bodies of fresh water having a major dimension of 0.5 km or more (Irwin 1975), but many smaller bodies of water including sand dune lakes, kettle lakes, and oxbow lakes can also be referred to as lakes based on their other physical characteristics. How far landward the margin might be considered to extend is also rather arbitrary, and is used only loosely here. Consequently, lake margin vegetation ranges from periodically inundated podocarp forest as in Westland, through tall reedland and rushland, to sedgeland and herbfield, and down to open land with only scattered herbs on rocky lake shores as in many eastern South Island lakes.

Several exotic aquatic weeds such as lagarosiphon (Lagarosiphon major) are a problem. Terrestrial weeds such as Russell lupin (Lupinus polyphyllus) or alligator weed (Alternanthera philoxeroides) and exotic grasses are also a potential threat to some types of lake margins. These areas are mostly located away from urban areas in agricultural landscapes where they are susceptible to grazing, trampling, and nutrient enrichment by domestic and feral animals. Very few are fenced. Some lakes have high recreational value and can be impacted by boating (entry and exit ways), fishing (trampling) and off-road vehicles. The increasing demand for electricity via dams poses a threat to some lakes.

Lakes occur throughout New Zealand, from sea level to above treeline, where they are more likely to be called tarns.