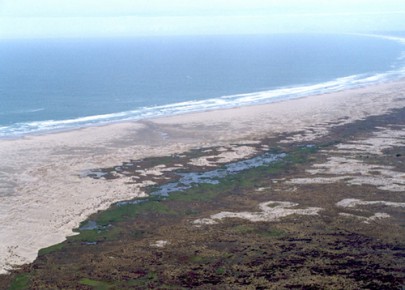 Damp sand plains are flat areas where wind has removed sand down to a level where the water is permanently just below the surface or occasionally above it. This stabilises the sand and prevents the surface being lowered further. They often form between a series of sand dunes. This system can grade upslope into dune deflation hollows where the sand is excessively drained for longer periods, and down slope into dune slacks where the water table is nearly permanently at the surface and may be covered during high tides. Damp sand plains are initially colonised by small plants such as sand carex (Carex pumila), Selliera radicans and Gunnera dentata, and then by progressively taller plants over time such as knobby club rush (Ficinia nodosa).

Coastal development poses a threat: damp sand plains have been converted into agricultural land and development is common due to demand for coastal property, but some remote areas are less affected. Due to development, planting exotic species, particularly marram grass (Ammophila arenaria) for stabilisation against erosion has been common, which alters natural vegetation patterns.

Vehicle traffic, especially off-road vehicles, is a problem in some areas.

Climate change poses a threat due to increased erosion from rising sea levels.

Damp sand plains are found in association with sand dune systems throughout the New Zealand coast. They are particularly common in the western North Island from the Manawatu region to Wanganui, especially between the Manawatu and Rangitikei rivers where an extensive flat hinterland has allowed the dunes to spread inland. They also occur in Northland and on Stewart Island and Chatham Island.