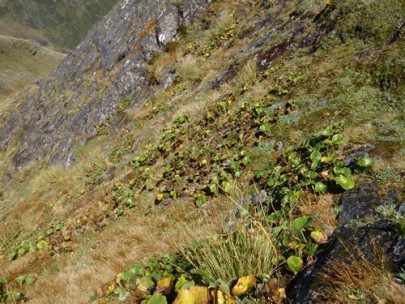 Snow bank communities occur in the alpine zone in situations where snow lies for up to seven months of the year. They are saturated well into summer, and often have loamy soils with capacity to hold water for much of the remainder of the year, so that they tend to accumulate organic matter (Talbot 1992). They support small grasses and herbs. Some of the prominent plant species in snow banks are mountain snow tussock (Chionochloa oreophila), silky alpine buttercup (Ranunculus sericophyllus) and white mountain daisy (Celmisia allanii).

Threatened plants include the nationally endangered Myosotis cheesemanii and the recovering Ranunculus godleyanus.

Snowbanks are vulnerable to exotic herbivores, particularly chamois and tahr because of the many palatable large herb species that are characteristic of this ecosystem. Weeds pose very little threat due to the inhospitable climate in the alpine zone. They are dynamic sites which can be altered by various forms of erosion. Receding of snow line as temperatures increase due to global warming may lead to local extinction on lower mountains and/or those in more northern parts. Also some areas, particularly those near ski fields or popular mountaineering routes, may be threatened due to recreation impacts.