Many erosion-sediment studies conducted round the world, including in New Zealand, have focused on sediment quantity in which annual loads from catchments are estimated. However, sediment quality is as important as quantity for predicting environmental behaviour and effects of suspended particulate matter (SPM) on aquatic life and human uses of water. Accordingly, in the STEC programme the scope of the research is considerably broadened – to consider particle size, optical properties and organic content of sediment, plus event dynamics rather than merely annual loads.

A comprehensive model framework, TEST (Temporal Erosion and Sediment Transport), is being developed in STEC to link river suspended sediment and related water quality to catchment erosion. TEST operates at the event scale with a focus on the stormflows that convey most sediment. In the Manawatu catchment, measurements have been made of sediment quality as well as quantity over stormflows to provide suitable data for calibrating TEST.

We sampled suspended sediment and related water quality at three sites in the Manawatū catchment within Horizons Regional Council’s hydrometric and state-of-environment river monitoring network (Figure 1). The main-stem river was sampled at the Teachers College (TCOL) site in Palmerston North, and two major tributaries were also sampled: the (‘muddy’) Tiraumea River at Ngaturi (NGA) on the east side of the main divide, and the (‘sandy’) Pohangina River at Mais Reach (MAI) on the west side, closer to Palmerston North. Stormflow water samples were analysed by the NIWA-Hamilton Water Quality Laboratory for standard sediment concentration metrics, but also for several sediment quality metrics characterising organic content, particle size and light attenuation of river suspended sediment (Table 1). The river stormflow sediment analyses were identical to analyses of soil samples, because we want to explicitly link river sediment to erosion sources. 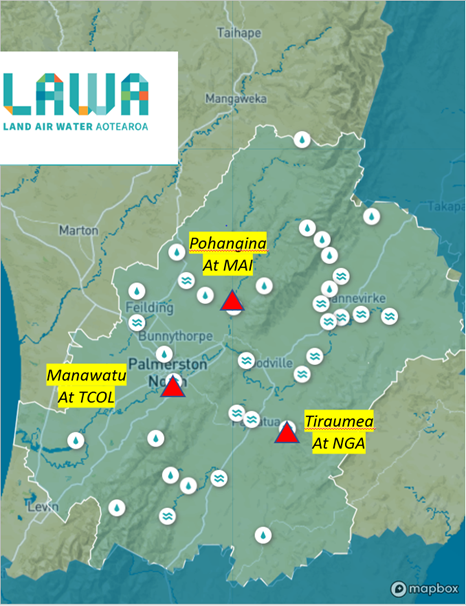 Figure 1. Map of the Manawatu Catchment from the LAWA website, showing monitoring sites in Horizons network. The river flows mainly westward, through the main axial mountains of the Ruahine (NE) and Tararua (SW) ranges, to enter the Tasman Sea at the left

Table 1. STEC laboratory analyses over stormflows at three sites in the Manawatu catchment.

Eleven river stormflow events were sampled over more than two calendar years. Unfortunately, conditions have been uncommonly dry and few large events, approaching annual flood size, have been sampled. However, the data we have collected seem to be of good quality, and should provide an excellent basis for implementing the river sediment component of TEST – allowing for a degree of extrapolation for very large (highly turbid) events.

Figure 2 shows example hydrograph data collected over a storm event peaking on 10 November 2020 on the main Manawatū at the Teachers College (TCOL) site. Both light beam attenuation (beam-c) and suspended sediment concentration (SSC – the concentration of suspended clay + silt + sand) are predicted reasonably well from the high-frequency turbidity record – although the SSC measurements on stormflow samples collected over this particular event (brown dots) tend to be higher than predicted from the long-term (overall) relationship with field turbidity (Figure 3). 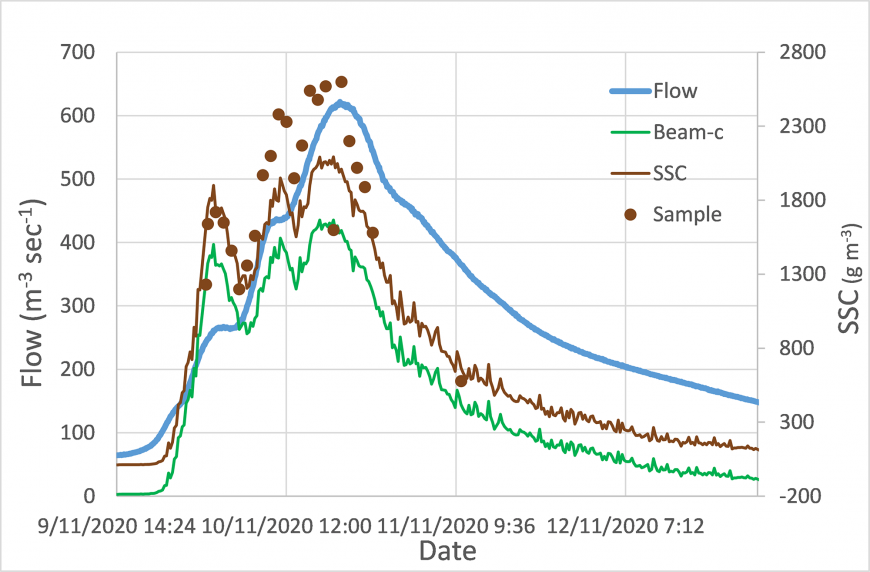 Figure 2. Dynamics of sediment concentration and associated light attenuation over a flood event in the Manawatu River. Data are for the Teachers College site (TCOL, within Palmerston North) on 10 November, 2020. The blue line is the discharge hydrograph, and the brown line is sediment concentration (SSC) estimated from calibration of the high-frequency turbidity sensor. Actual measurements of sediment concentration on auto-samples collected over the event (brown dots) tend to be higher than estimated (from the long-term relationship given in Figure 3) owing to relatively high sand content. The green line is the light beam attenuation coefficient also estimated from field turbidity (See Figure 4). 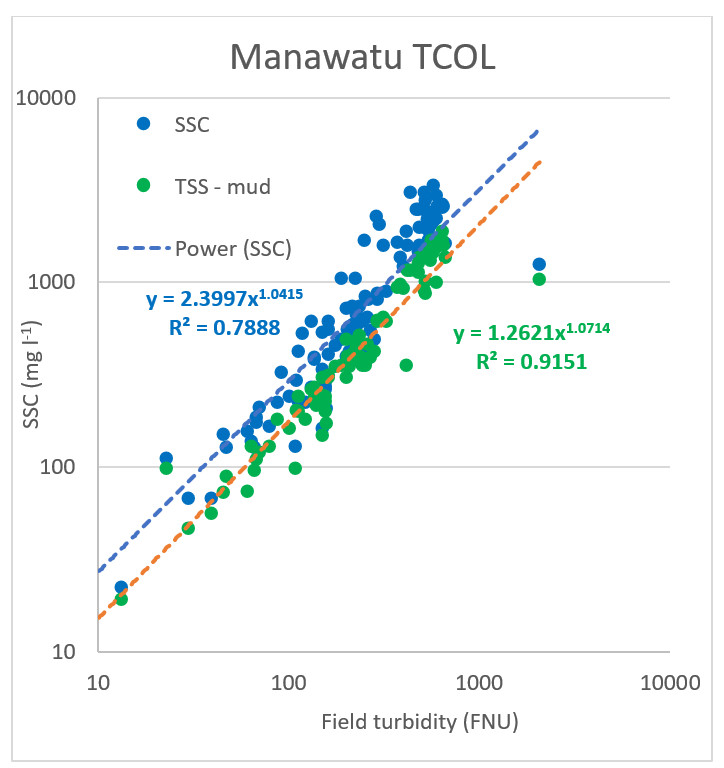 Figure 3. Measurements of SSC and its mud fraction (TSS-mud) plotted versus field turbidity over 11 stormflow events in the Manawatu at Teachers College. The mud concentration (green) is appreciably more closely related to turbidity than SSC (blue) because the (variable) sand fraction contributes appreciable mass but negligible light scattering.

Measurement of light beam attenuation (beam-c), which can be used to accurately calculate visual clarity, is a novel aspect of the STEC river monitoring (Table 1). Beam-c measurements were used to calibrate the high-frequency field turbidity sensors operating at each site. Figure 4 shows beam-c plotted against field turbidity for the three STEC sites in the Manawatu catchment. As expected, beam-c typically provides an excellent calibration of high-frequency field turbidity. The rather higher degree of ‘noise’ (shown by a lower R value) at Teachers College than at the two tributary sites may reflect mixed sources of sediment, including contributions from the ‘muddy’ Tiraumea and ‘sandy’ Pohengina tributaries in varying ratios. 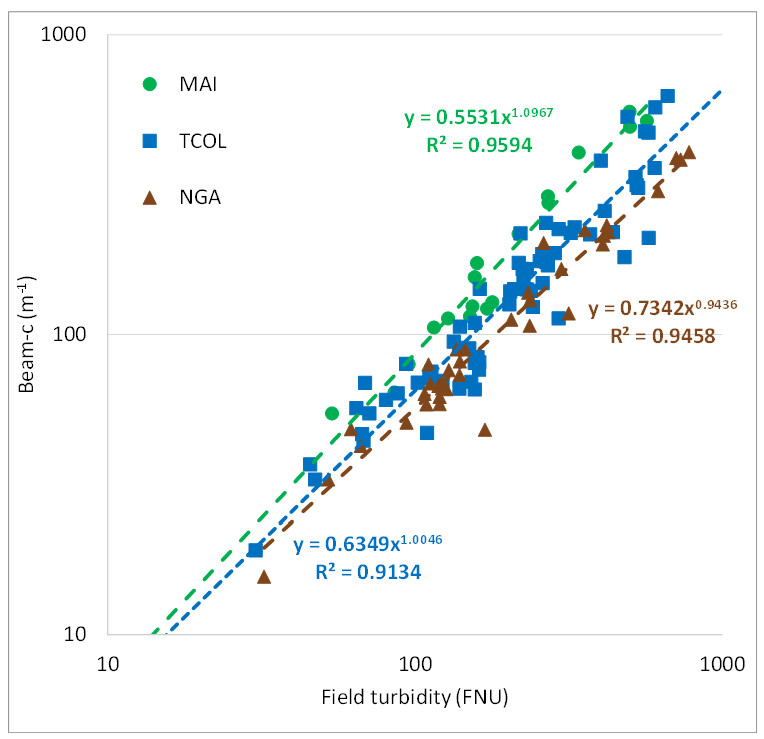 Figure 4. Measurements of light beam attenuation (beam-c) over stormflow events plotted versus field turbidity at three STEC sites in the Manawatu Catchment. Manawatu at TCOL – blue points and line; Tiraumea at NGA – brown points and line; Pohangina at MAIS – green points and line. The relationships are closer for the tributary sites, where suspended sediment may be relatively homogeneous, than for the main-stem Teachers College site (downstream) with mixed source contributions.

Visual clarity is the only suspended sediment metric for which thresholds, including ‘bottom lines’ (allowable minima protecting aquatic life) are defined in the National Policy Statement on Freshwater Management (the NPS-FM 2020). Thresholds for deposited fine sediment are also given in NPS-FM 2020). We expect that modelling within the TEST framework, calibrated with beam-c data from Manawatu stormflows, will permit us to assess response of visual clarity, as well as sediment load, to different erosion control scenarios.