A New Aquatic Weed on the Radar 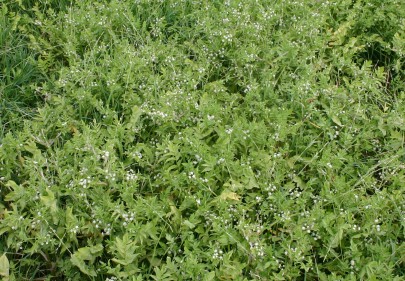 Water celery is a perennial herb in the carrot family, Apiaceae. It is a sprawling, emergent aquatic plant that can grow up to one metre in height. Plants have glossy, bright green leaves and white flowers that grow close to the leaf bases. Water celery grows in shallow ponds and lakes, drains, canals, ditches, the margins of slow-flowing streams and riparian zones, in marshy areas and around springs. It can form submerged patches in slow-flowing deep water. Seedlings contribute to its spread from the edges of existing stands, and new populations establish from detached shoots that readily develop roots.

Water celery is native to Europe, North Africa and western Asia. The plant has naturalised in parts of North, Central and South America, and in south-western Australia, and is a declared invasive weed in Chile. It is common in many river systems in its native range, even being regarded as weedy in Portugal and Spain, where it is native.

In New Zealand, water celery was first recorded as naturalised in 1947, most likely introduced as a contaminant via seed or ornamental aquatic plants. Infestations are now scattered from Northland to Wellington, and the plant is locally abundant in many regions, especially in coastal areas. It has also established in the north and west of the South Island, where its distribution is confined to a small number of streams.

Water celery contributes to the degradation of water quality in streams, especially in combination with farm drainage entering these systems. Infestations trap nutrients and deplete dissolved oxygen when plants decompose, and they threaten endangered native species in wetlands. In the North Island, water celery needs to be regularly managed to clear drainage networks. If the weed is not cleared from slow-flowing streams, the build-up of plant biomass reduces water flow and can lead to flooding. Water celery is currently controlled mechanically and chemically, which only provides temporary relief, with rapid regrowth of surviving plants or recolonisation through seed germination.

The prospects of developing a biocontrol programme for water celery in New Zealand were recently assessed at the request of Nelson City Council. In a thorough desk-top study led by Ronny Groenteman, and assisted by Peter Heenan and plant pathologist Jane Barton (independent contractor), several pathogen and insect natural enemies associated with water celery were identified.

“A total of nine pathogenic micro-organisms have been recorded from water celery, which is a relatively small number as far as plant pathogens go,” observed Jane. “However, only one of these, a white smut (Etyloma helosciadii), appears to be a promising candidate due to its potential to have a restricted host range,” she added. Eleven arthropods were identified in the literature as associated with water celery, but, again, only one is a promising candidate agent, a stem-mining moth (Depressaria ultimella). The moth is common on water celery in the United Kingdom, where plants with extensive larval mining collapse late in the growing season. The moth reportedly has a preference for water celery growing in slow-flowing water, such as roadside ditches, as opposed to streams. Nevertheless, it may be worth pursuing, since our research suggests the moth could be sufficiently host specific for New Zealand and has the potential to be very damaging.

“Any biocontrol agents for water celery would need a fairly high degree of host specificity due to water celery’s taxonomic affinities with valued food plants in the carrot family (e.g. celery, celeriac, parsnip, carrot, parsley and coriander) and New Zealand natives in the genus Lilaeopsis,” explained Ronny. “Fortunately, after taxonomic revision, water celery is no longer in the same genus as celery as it once used to be. This increases the likelihood of finding natural enemies that are sufficiently host specific,” she added. Based on this research, water celery appears to be a viable biocontrol target, with some natural enemies already identified, and with the possibility that additional candidate agents will be discovered during native range surveys. Also, aquatic plants tend to be good biocontrol targets, based on evidence from programmes elsewhere in the world. Since water celery is regarded as the worst among a suite of aquatic weeds being managed around Nelson and Wellington, a biocontrol programme may be timely.

This project was funded through an Envirolink Grant (2042- NLCC111) to Nelson City Council.