Sodium monofluoroacetate (Compound 1080) is a highly water-soluble vertebrate pesticide, used in the control of possums and rabbits. Pest control operations using 1080, particularly the aerial distribution of 1080 baits, are closely monitored by medical officers of health, and in some cases they may specify that samples from waterways close to operational areas are tested for 1080.

Though the likelihood of the general public being exposed to 1080 as the result of pest control operations is considered low, circumstances may arise where people present themselves to their local GP and request a blood test for 1080 exposure.

The risk of potential contamination of New Zealand water supplies by 1080, particularly following aerial application of baits for pest control, has been addressed by research on the environmental effects and degradation of 1080 in water (e.g. Eason et al. 1992, 1993; Ogilvie et al. 1996; Booth et al. 1999; Eason & Wright 2001; Fisher et al. 2003; Suren 2006). Manaaki Whenua – Landcare Research maintains a database of the results of over 2000 water samples tested by the toxicology laboratory for 1080 contamination since 1990.

Employers in the pest control industry are encouraged to undertake the routine (at least annual) monitoring of workers who handle material containing 1080. Urine testing is the preferred method for measuring worker exposure to 1080. In the context of occupational exposure to 1080, the Occupational Safety and Health Service (OSH), Department of Labour, has established the Biological Exposure Index (BEI) at 0.015 µg/mL (ppm).

Vertebrate pesticides are used throughout New Zealand for control of pests such as possums, rabbits, and rodents. There is potential for effects on non-target animals as well as the contamination of waterways, soil, leaf-litter (which is an important habitat for invertebrates), and plants (Spurr & Powlesland 1998). 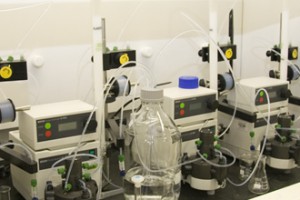 Protocol for sampling and testing blood plasma for 1080

Protocol for sampling and testing urine for 1080

Protocol for tissue sampling and testing for vertebrate pesticides in animals