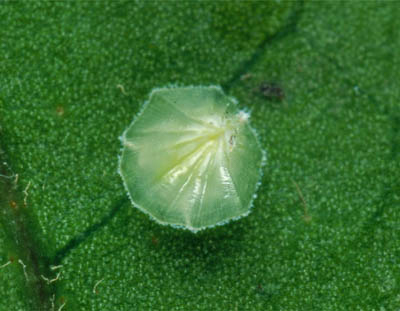 William Maskell named this species patella in 1879, after the latin name for a limpet shell.

Limpet scale's shape is approximately 8 or 10-sided and conical. Its fringe is based on a row of alternating round and pointed spines with waxy extrusions. The cover or test is in one piece instead of rows of plates. These and other details make it quite different from all the other native soft scales and it has its own genus, Inglisia. In the past, other species were also included in Inglisia but they are not closely related and do not belong there. We have removed all the other New Zealand species from Inglisia and put them in different genera, such as Crystallotesta.

Biology: probably one generation per year. Females and males develop on the same leaves. The tiny winged adult males live for only a few days, long enough to mate with females.