The decision and all associated documents can be found on EPA's website.

This application will be submitted by the Horehound Biocontrol Group (HBG). This is a collective of landowners supported by a grant from the Sustainable Farming Fund. Manaaki Whenua Landcare Research is the science provider to the group. Manaaki Whenua Landcare Research has contracted Richard Hill & Associates to prepare the application and to manage the application process on behalf of the HBG, including pre-application consultation with EPA, and with Māori and with other stakeholders.

Horehound is a small perennial shrub that looks like mint. It is native to temperate parts of Eurasia, Europe, the Middle East and the Mediterranean region, including North Africa. It was first recorded as naturalised in New Zealand in 1867, and was classified as a weed by1902. It is also an acknowledged weed in Australia, southern USA and South America.

Horehound is not palatable to stock, and taints the meat of animals that are forced to graze on it. The weed displaces preferred forage plants, reducing pasture productivity. Horehound produces hooked burrs (seed capsules) that stick to the wool of sheep and this downgrades the quality of the fleece.  Horehound is most abundant in Canterbury and Otago but has become an increasing problem on dryland farms across the country. It is now recognised as one of the worst weeds in lucerne crops. Negative economic impacts to farmers may be as high as $29-39m annually. 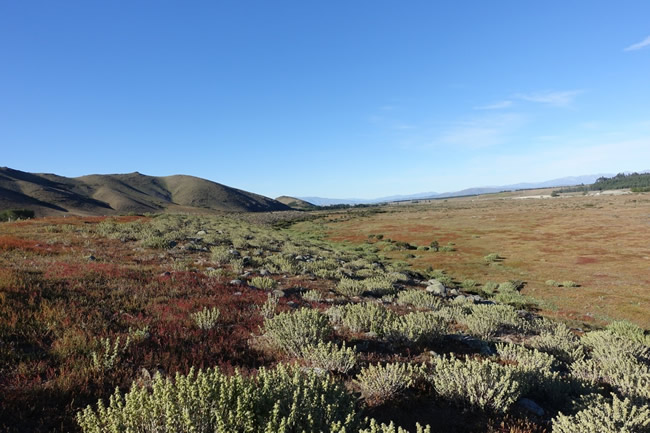 It is not an acknowledged problem in the conservation estate in New Zealand, but is known to replace native vegetation in affected areas of Australia.

While a problem for farmers, horehound is valued as a medicinal herb in New Zealand, and is harvested from the wild for this purpose.  The plant has also been studied elsewhere for its potential to rehabilitate soils from salinity and heavy metal contamination, as a pesticide, as an improver for cereal crops, as a food preservative, as an ingredient in beer brewing, and for inhibiting corrosion (Groenteman et al. 2017).

Landowners have limited choices for horehound management. The waxy coating on the leaves provides some protection against herbicides. Also, young lucerne stands cannot tolerate the most effective treatment regime in their first 3-4 years and horehound may be developing resistance to this spray.
A biological control programme for horehound in Australia began 1994.  Extensive host range tests were conducted to assess the risk that the two biological control agents posed to non-target plants.  Both species were highly host-specific, and on that evidence, release was approved. The horehound plume moth was first released in 1994, but in earnest from 1997. It became established by 1998. The horehound clearwing moth was first released in 1997, and establishment was also confirmed in 1998.  Populations have grown, and in some areas, reduction in seed production and plant vigour suggest that successful biological control has been achieved. 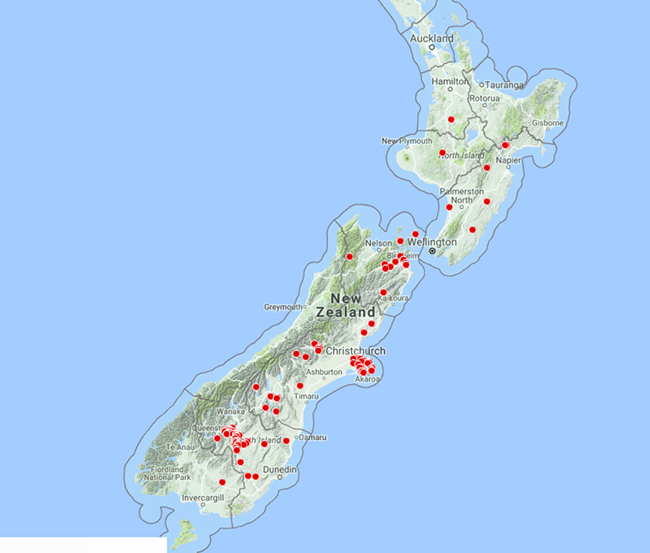 Records of horehound in the New Zealand National Vegetation Survey

More information about Horehound and its control can be found here.

The potential risks, costs and benefits of the proposed introduction to New Zealand of Wheeleria spilodactylus and Chamaesphecia mysiniformis, and the possible reduction in the abundance and vigour of horehound will be identified by literature review and by consultation with stakeholders.

The centrifugal testing protocols that form the accepted basis for assessment of risk to non-target plants state that closely-related plants are more likely to be hosts in a new environment than less closely-related plants. Marrubium vulgare belongs to the mint family (Labiatae or sometimes Lamiaceae). The family is represented in New Zealand by five plant species in five genera.  None of the native species belong to the same sub-family as Marrubium (Lamioideae) and so are only distantly-related to horehound.  Four of the New Zealand natives have not been tested, but related species were included in the tests conducted in Australia before the agents were released there.  These test plants can be regarded as surrogates for the native species.
Most of the culinary herbs, e.g. mint, oregano, rosemary, sage, and many more, belong to the family Labiatae. None of these belongs to the same sub-family as Marrubium so are only distantly related to horehound. Extensive host-range tests were conducted in Australia before the two agents were released there (Sagliocco & Coupland, 1995; Victorian Department of Conservation and Natural Resources, 1993; Wills, 2000). Significant attack was restricted to Horehound and several closely-related species. None of the important culinary /commercial species was attacked in any way.

These insects are expected to be host specific in New Zealand, so population densities capable of interacting significantly with other plants or animals will only be found in close proximity to the target plant. Disturbance of ecological relationships in New Zealand is not expected to be significant. These issues will be discussed in detail in the application.
Manaaki Whenua Landcare Research is in dialogue with those who wild-harvest horehound. The concerns are discussed in depth in the feasibility study, and a report from the industry is appended to that document.

The members of the EPA's national network (Te Herenga) will be contacted in February 2018 and invited to enter dialogue on plan to apply to EPA to introduce biological control agents against horehound.

The message to Te Herenga will describe how the applicant intends to assess the risks, costs and benefits associated with the proposed introductions. Members will be invited to identify any issues that they would like to be addressed in the application.  Further consultation will be coordinated through the Ngāi Tahu HSNO komiti.

The responses specifically related to the proposed introduction of horehound agents are summarised here:

At the request of Manaaki Whenua, EPA convened a reference group from Te Herenga to meet and discuss the issues surrounding the proposed applications. The application will address the principles identified in that report.

A summary of responses is provided here