Ronny Groenteman, November 2016
t’s been a couple of weeks now since Bob returned from the UK with chilly bins full of wasp combs, and excitement is building up. 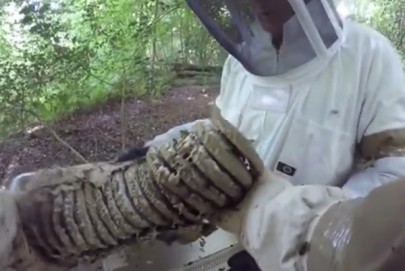 Common wasp nest being collected from a tree at Winkworth Arboretum, UK.

Early in September Bob left for the UK tasked with the mission to collect new genetic stock of the parasitic wasp Specophaga vesparum from the same geographic range our common wasps come from. Soon after landing he was able to locate a good number of nests, and the idea was for him to come back to dig these nests up when he was later joined by Morgan, a wasp-skilled field assistant. When Morgan arrived and the two returned to the nests Bob had pre-marked, they were astonished to discover someone had beaten them to many of the nests – badgers! It turns out these mustelids are pretty effective nest excavators…maybe we can domesticate one as a field assistant? (Says Bob with hope…)

Other adventures included rowing out to small islands infested with wasps at the National Trust managed Petworth House and Park, removing a European hornet (Vespa crabro) nest from a bird house in the New Forest, excavating nests very near to a ‘house’ surrounded by a moat called Oburgh Hall (another National Trust site), and waiting for a break in traffic at a crosswalk in full wasp suit carrying two boxes of nests at Morden Hall Park. While we are very grateful to the National Trust for enthusiastically locating nests for us to survey, there was some hesitation before each excavation because of our concern that we may inadvertently damage some unknown archaeological treasure that no one had warned us about.

Nevertheless, the two were able to dig out a good number of nests, and found plenty of reasons to be optimistic about what the future holds for wasp biocontrol: aside from Sphecophaga, they found larvae of the hoverfly Volucella ianis, the beetle Metoecus paradoxus, and mites that look incredibly similar to the recently-described Pneumolaelaps niutirani. We still have to run a DNA test to find out if they are the same thing. So, while this trip was about importing Sphecophaga, Bob has a good head start for the next project if the new SFF application turns out to be successful.

Back in NZ, the wasp combs Bob brought back are now housed in the insect containment facility at Landcare Research in Lincoln, and a good proportion of cells appear to be parasitised with Sphecophaga. Some combs are visibly made out of queen cells, and it is possible to get a bounty of two Sphecophaga out of each queen cells. Once the parasitoids start emerging, a proportion will get sacrificed for disease testing – we want to make sure we release a healthy culture into the wild. Pending disease-freedom, releases will begin in January, with Banks Peninsula in mind as targets for early release site, to enable a close watch and easy collection for later redistribution. In addition, semi-wild wasp nests will be set up on Landcare Research campus to mass-rear Sphecophaga. Parasitised wasp pupae from this mass rearing will be distributed later on to more release sites. All working to plan, we hope to be able to make 5 – 6 releases, of 50 - 100 individuals in each in the first instance.

In the meantime you can enjoy the little photo gallery below and watch videos Bob filmed while in the UK.

All extremely exciting – didn’t we say so???