Ronny Groenteman, July 2016
In the last update we told you that the wasp biocontrol project is at a turning point. Well, we have just heard from the Sustainable Farming Fund that our request for variation has been approved, so it is time to tell you what happens next, and why.

In the last update we told you that the wasp biocontrol project is at a turning point. Well, we have just heard from the Sustainable Farming Fund that our request for variation has been approved, so it is time to tell you what happens next, and why.

In the one year of funding left in the grant we plan to refocus efforts mostly away from the mite Pneumolaelaps niutirani, because it is looking less likely that the mite will make for a classical biocontrol agent i.e. one that works in perpetuity on a landscape scale. The mite might work better if humans load it with wasp-specific pathogens and distribute the ‘combo’ similar to how we would distribute bait and poison, for example.

We will continue to support efforts by the BioHeritage National Science Challenge to develop the mite in that direction, but we want to put more emphasis on the remaining gap: long-term self-sustaining biocontrol solutions. In the first instance, we are going to pursue the introduction of new genetic stock of the parasitoid Sphecophaga. 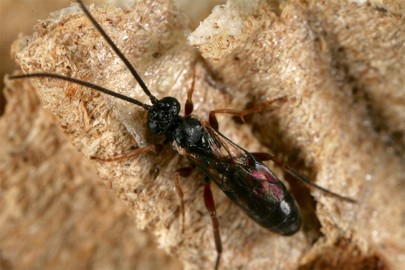 Why Sphecophaga again? Have we not tried them before?

Sphecophaga are parasitic wasps that attack Vespula wasps. Their potential to provide biocontrol for Vespula in New Zealand was previously identified, and they were introduced in the 1980s. Many thousands of them were released, but these efforts resulted in poor establishment, and Sphecophaga distribution in New Zealand is since limited to one site in Marlborough and one in Canterbury.

Why do we think it is good use of resources to chase Sphecophaga again if they failed so miserably? What do we know now that we didn’t know then, and that could make a difference?

There are two reasons for our renewed interest in Sphecophaga:

1. We now know that due to technical rearing issues during the 1980s introductions, the surviving Sphecophaga in the wild in New Zealand are all descendants of one or, at best two founder females. This genetic bottleneck probably contributed to their difficulties to adjust to different environments, and new genetic stock could open up new possibilities for adaptation.

2. Recent work at Victoria University discovered that the source of New Zealand’s common wasp is from the UK. This was not known at the time Sphecophaga were introduced originally, and this piece of information is extremely important! If you think about the ‘language’ wasps use to communicate within the colony and between colonies, it is the language of chemicals (think for example about ants on a trail tapping their antennae over each other to tell if the other ant is their colony member or not). Sphecophaga must ‘speak’ the correct language in order for the wasps to fail to detect it. Now think about Sphcophaga coming from a different region, ‘speaking’ another dialect. Vespula are so hygienic, that they were most likely going to remove the foreign intruders from the colony in no-time. The Sphecophaga we brought in the 1980s were from nowhere near the UK, so they would have been detected and thrown out of the nest…

Armed with these new understandings, we consider the next prudent step in the wasp biocontrol progression is to go to the UK and bring Sphecophaga from the correct geographic range. This will follow best-practice, and will not entail introduction of a new organism, because Sphecophaga is already here. Bob is planning a collecting trip to the UK during their autumn, in a couple of months.

Will this be enough to provide biocontrol for wasps in New Zealand?

The answer to that is – probably not. More often than not, we need multiple agents to gain sufficient suppression of a pest.

We have a couple of options to explore, including the parasitic hoverfly Vollucella inanis, and the fly Leopoldius coronatus in the family Conopidae, that also parasitises Vespula wasps.

These flies are not present in New Zealand, and very little is known about them; well, not a lot of people study in detail all things waspy Therefore, in order to explore their potential as biocontrol agents we plan to embark on a ‘next phase’ for the wasp biocontrol programme, which requires new funding.

We have been talking to the Sustainable Farming Fund about it, and have been encouraged to apply for another grant. These days we are busy preparing the new application, which will be submitted in early September. Preparations include writing the proposal, as well as looking for sources of co-funding – an obligatory component of any Sustainable Farming Fund grant. If successful, the funding will become available in July 2017, just when the current project is due to finish.