German and common wasps (Vespula species) are social wasps that, since being introduced into New Zealand have spread throughout the country and during the "wasp season" there numbers are so high that they are a pest of urban, rural, and natural ecosystems. 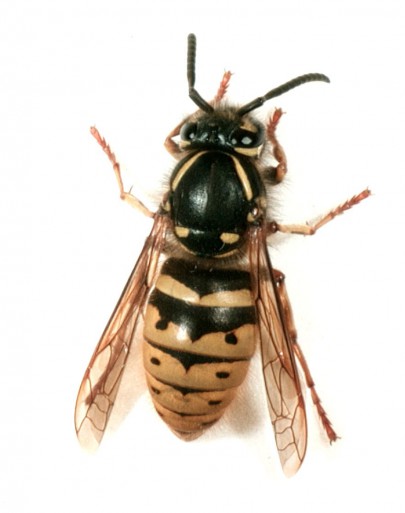 Social wasps are those species that construct a nest (colony) in which a caste system develops; typically with a queen laying eggs and ‘workers’ taking care of the developing larvae, foraging for resources, and nest defence. Other insects with complex social systems include ants and some bees (which are both closely related to social wasps), and also termites.

New Zealand has the highest densities of these wasps in the world. In beech forest with honeydew, the biomass of social wasps (about 1100 g/ha/yr) is greater than that of all the native birds, upseting the ecological balance in native ecosystems. .

They can spoil peoples’ enjoyment of the outdoors, as well posing a health risk; affect the profitability and safety of industries such as beekeeping, horticulture, forestry and tourism.

The German wasp (Vespula germanica) is native to Europe and northern Africa. It was first found at an air force base near Hamilton, in 1945, and it has been suggested that hibernating queens arrived in New Zealand in crates of aircraft parts from Europe after the Second World War. Although considerable efforts were made to eradicate nests, German wasps spread very quickly, and within a few years were found in most of the North Island and parts of the upper South Island.

The common wasp (V. vulgaris) is native to Europe and parts of Asia (e.g. Pakistan and northern China). This species has also become introduced in Australia and, most recently, Argentina. Single specimens of the common wasp were recorded in New Zealand in 1921 and 1945 but these apparently did not establish. The common wasp was confirmed as established in Dunedin in 1983, although, examination of museum specimens showed that queens had been collected from Wellington as early as 1978. It rapidly spread throughout New Zealand and almost completely displaced the German wasp from beech forests in the upper South Island because of its superior competitiveness.

In general, wasp populations are large in New Zealand because of the mild climate, lack of natural enemies, and very abundant food sources (especially honeydew). However, recent reviews of invasive invertebrates continually point to social insects as one of the top problems around the world because of their high level of ‘ecological plasticity’ (i.e. flexibility to adapt and utilise resources). Factors such as nest size and longevity, a very wide diet range, feeding at different trophic levels, and ability to reach very high densities, all contribute to the successful invasion of social wasps.

Both the German and common wasp are now widespread throughout New Zealand. In some habitats, they can be some of the most common insects encountered. As a result, wasps have had detrimental impacts on native ecosystems, and human health, cause economic losses for beekeepers, and disrupt recreational activities.

Social wasps are pests in many temperate regions of the world. Consequently, a sizeable amount of research effort has been focused on developing control strategies. However, despite these efforts, wasps continue to be a major problem.

Find out more about  Vespex® »