About the key to weedy daisies of the South Pacific

Asteraceae in the South Pacific

One of the largest families of flowering plants in the world and it has been estimated that one in every ten of these plants belongs to the Asteraceae.

They are also worldwide and grow in all but the most extreme habitats and places such as Antarctica.  Asteraceae are most abundant in dry or dryish places in temperate and subtropical regions as well as montane areas nearer the Equator.  They grow in arid to aquatic habitats, especially in open places.  The great majority are herbaceous perennials or annuals but there are also many small shrubs, as well as a few trees and climbers.  Many Asteraceae are cultivated as ornamentals and there are a few species that are grown for edible parts, including the production of oil.

In the tropical South Pacific the Poaceae or grasses are usually the largest family with Asteraceae second.  However there are few indigenous Asteraceae as compared to the number of introduced ones, the latter comprising many species that are adventive.  Most of the latter grow in open places, especially in habitats modified by human activities such as roadsides, gardens, plantations, and waste places in and around habitations.  Several of the adventive members are noxious weeds according to their habitat.

Considering the size of the family it is not surprising that there is great variation among the different Asteraceae and the family is divided into 14 or 15 groups called tribes.  The majority, grow at least occasionally, somewhere in the South Pacific region, but by far the largest and most important is the Heliantheae or sunflower tribe and this even has an endemic genus of small trees in East Polynesia.  Despite all the variation the family is well-defined with its distinctive flower head or capitulum consisting of few to numerous small florets with a characteristic pollination mechanism.  According to their symmetry the florets are either of ray or disc type and various combinations of these are present in the capitula.

Forest and Kim Starr gave their permission to use photographs from their Plants of Hawaii website – ‘A collection of images, maps, and reports for plants found in Hawaii’.

Whistler, A. 2004. Wayside Plants of the Islands. Isle Botanica, Honolulu.

Plants of Hawaii. A collection of images, maps, and reports for plants found in Hawaii. By Forest and Kim Starr.
www.hear.org/starr/plants/ 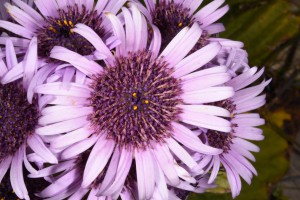