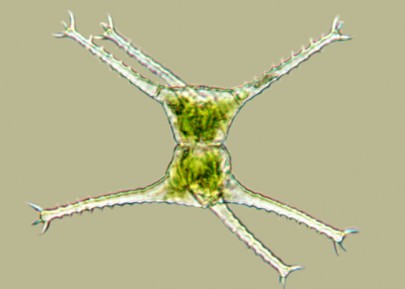 In common with other green algae and land plants, zygnemataleans have grass green chloroplasts containing chlorophylls a and b, and store starch inside their chloroplasts. Zygnemataleans are also known as the conjugating green algae, due to their mode of sexual reproduction, which is classically exemplified by the filamentous Spirogyra. Complementary mating cells form bridges between each of two filaments, and an amoeboid gamete moves through the bridge (swimming cells are totally absent from the group). The conjugation tubes can resemble the rungs of a ladder, so this type of conjugation is known as ladder-like (scalariform).

The filamentous zygnemataleans have close unicellular relatives, which are known as desmids. These conjugate in a similar way – although it is less frequently observed – and are themselves divided into two groups, saccoderm and placoderm. The latter are very distinctive due to deep constrictions at the cell equators, dividing each cell into two semi-cells that each contain chloroplasts, but share a single nucleus located in the constriction. Placoderm desmids are some of the most spectacular microscopic objects, for instance the beautiful Staurastrum and Micrasterias. Both filamentous and unicellular zygnemataleans produce gelatinous mucilage; this confers a slippery feel to the filaments, which can often be distinguished in the field using touch.

Surprisingly, recent work using gene sequence data has suggested that zygnemataleans are the closest relatives of the embryophytes (land plants). 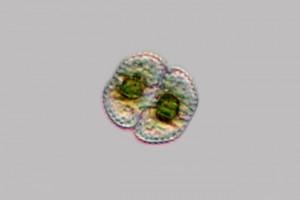 Semi-cells rounded, often with rough or warty surface, but spines do not occur. 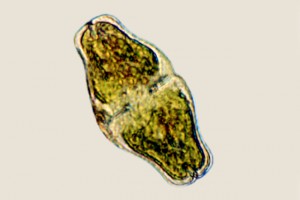 Semi-cells usually longer than wide, with prominent lobes, and a notch at the end of each one. 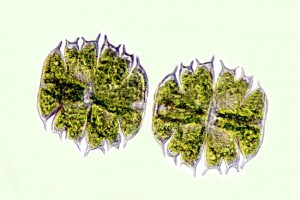 Cell flattened in end or side view; semi-cells composed of radiating "arms", all in one plane. 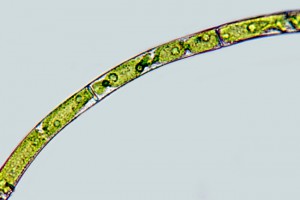 Chloroplast a flat plate, sometimes twisted or in different planes in adjacent cells. 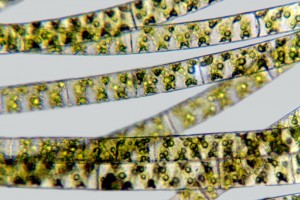 Chloroplast ribbon-shaped, spiralling around the cell. 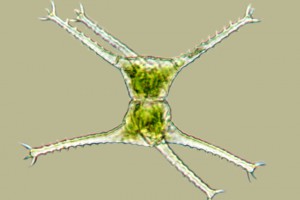 Cell not flattened; "arms" emerge from the end of each semi-cell and are radially arranged if view end-on. 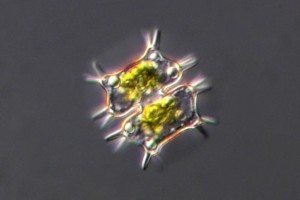 Semi-cells ovoid to slightly polygonal, each ornamented by at least 4 spines arising at 90 degress to the cell surface. 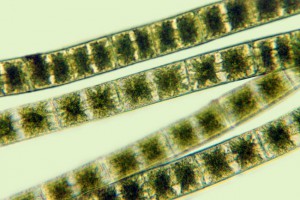