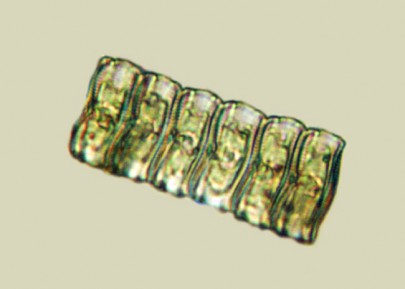 Diatoms are characterised by a unique feature: a cell wall composed of silica, which fits together in two halves like a box. The lid and base of the box are known as valves, which are connected by a girdle, and the whole structure is known as a frustule. This has the important consequence that a cell can appear quite different if viewed from the side ("girdle view") than if it is viewed from above ("valve view"). However, once this cell architecture is understood, a great world of diatom diversity becomes accessible to the investigator.

Frustules occur in two basic forms, cylindrical ("centric", circular in valve view) and elongated ("pennate", roughly boat-shaped in valve view, although there are many variations on the theme). The centric form is the oldest; all modern diatoms are ultimately descended from ancient centric diatoms. An extremely common centric diatom in freshwaters is Melosira, which forms long filaments of cells joined at the valve faces. An example of a pennate diatom is an unfortunate recent arrival in New Zealand, Didymosphenia, known also as "Didymo" or "rock snot".

Diatom frustules are sculpted in various ways by openings that pass through the silica. Striae, which are lines of pores, are commonly visible under the light microscope. More useful to identify the taxa in this guide is the raphe. This is a feature of some pennate diatoms. It is a slit-like structure extending lengthwise along the cell and that extrudes mucilage, allowing cells to glide along surfaces such as a microscope slide. Some pennate diatoms have raphes on both valve faces (e.g., Navicula), some on one (e.g., Planothidium), and some on neither (e.g., Ulnaria). In some genera the raphes are positioned in the centre of the valve face (e.g., Navicula), in others it is positioned to the side (e.g., Nitzschia), and in still others it traverses from the valve face onto the side of the valve (e.g., Eunotia). Therefore, an appreciation of this structure is very helpful for accurate identification.

Diatoms contain golden-brown chloroplasts, and contain chlorophylls a and c (never chlorophyll b). With practice, they can often be recognised in the field by their colour. Serious diatomists clean the cells with acid and peroxide so that only the frustules remain, aiding identification. However, many useful features can still be recognised in living material, and images in this guide often compare living and cleaned cells for comparison (see here for an example). 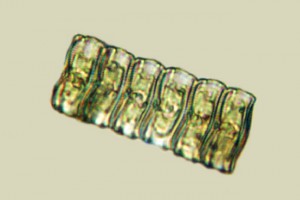 Boat-shaped in valve view; raphes on only one valve, the other valve lacking a central space between the striae; single cells may be enco... 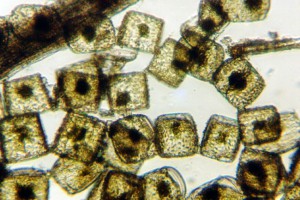 Cells drum-shaped; radiating lines absent from valve face; may be joined weakly at the edges of the valves to form chains. 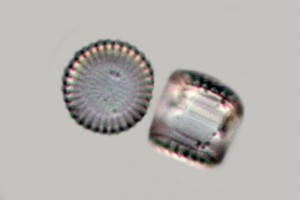 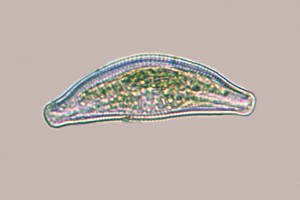 "Orange segment" shape in valve view; raphes on both valves; raphe ends turn towards the long edge of the valve. 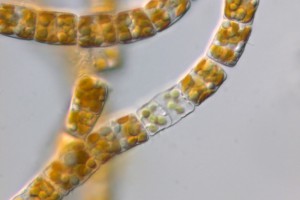 Boat-shaped in valve view, with prominent ribs (costae) running across the valve face, also visible in girdle view; single cells may be e... 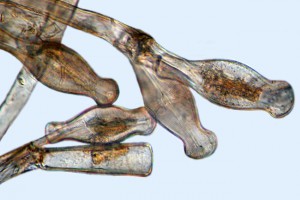 Club-shaped in valve view, with swellings at both the narrow and wide ends, wedge shaped in girdle view; large; one or more (commonly 3) ... 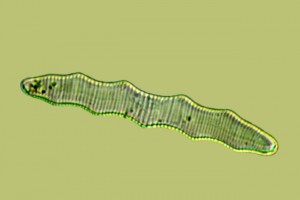 Curved in valve view, maybe with protruberances or swellings; each valve has a short raphe at each end, which curves from the side of the... 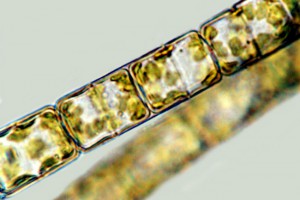 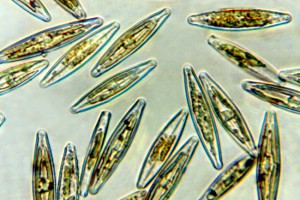 Boat shaped in valve view, with tapering ends; striae not prominent; raphes on both valves, not enclosed in longitudinal ribs; no cross-l... 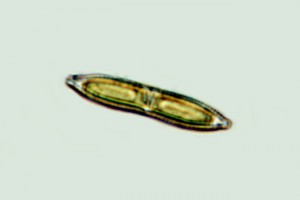 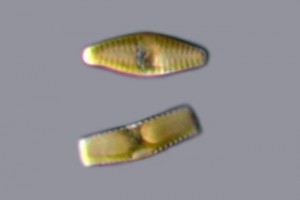 Boat-shaped with tapering ends in valve view, bent rectangular in girdle view; raphes on one valve only, with "horse shoe" on the other v... 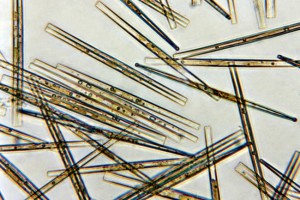 Valve face outline is elongated to needle-like; striae meet the edge of a narrow sternum; there is a central area lacking striae.