Pollination is the process of transferring pollen from anther (male flower part) to stigma (female flower part). Without it, seeds and fruit will not be formed. Pollination can be achieved by wind or by using animals such as insects.

One in three mouthfuls of the food we eat are the result of animal pollination. Examples include fruits such as strawberries, apples and figs, seeds such as beans and sunflower kernels, and nuts such as walnuts and chestnuts. Even salad plants need pollination to produce the seeds from which they are grown!

Many exotic plants are grown as crops in New Zealand, including; kiwifruit, apples, grapes, stone fruit and some seed crops. The exotic honeybee Apis mellifera is used for much of the commercial pollination that occurs in New Zealand, but bumblebees Bombus spp., drone flies Eristalis tenax, native bees, flies and other insects also pollinate crops.

New Zealand has a mix of both native (always been here) and exotic (brought in by humans – either deliberately of by accident) insects. The table below is grouped by insect family. 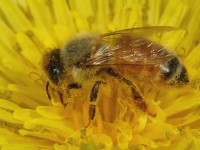 Honeybee (Apis mellifera)
exotic
Probably the most common pollinating insect you will see. Honeybees live in social hives consisting of thousands of workers and one queen. Commercial hives are used both for honey production and for commercial pollination of a wide range of crops. 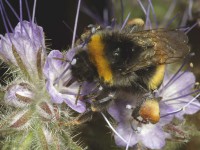 Bumblebee (Bombus spp.)
exotic
New Zealand has four species, three of which have long tongues. Bumblebees live in social hives consisting 200-300 workers and one queen. Because of their long tongues, they can pollinate a large range of flowers, but they are also known to bite holes in the side of a flower to 'rob' nectar. 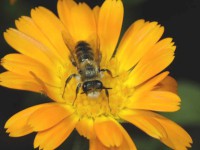 Native bee (Leioproctus fulvescens)
native
L. fulvescens is the largest (about 10mm) and most common native bee. It can be orange-brown to yellow, while other Leioproctus species are smaller and mostly black.
These bees are solitary, digging branching tunnels in bare ground in which to lay eggs. The female's hairy back legs are used to carry pollen back to the nests as food for the larvae. 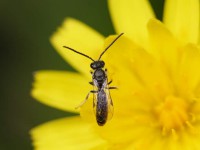 Native bee (Lasioglossum sordidum)
native
L. sordidum is the second most common native bee. It is smaller than Leioproctus and with a distinct difference between males (pictured) and females (wider abdomen). These bees are mostly solitary nesters, although several females may share a tunnel entrance in an area of bare ground. L. sordidum visits a wide range of flowers and will investigate anything yellow or orange. 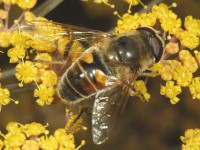 Drone fly (Eristalis tenax)
exotic
This fly is often mistaken for a honeybee because of its colour and banding pattern. Key things to look for are the 'H'-shaped band on the abdomen, much larger eyes, two wings instead of four and a more rapid, darting flight. They also do not sting! Their 'rat-tailed' maggots can be found in stagnant water.
Drone flies will visit a range of flowers, especially flowers of plants belonging to the carrot and cabbage families. 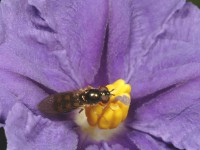 Hover fly (Melanostoma fasciatum)
native
About ten species of hoverfly can be found hovering near flowers and feeding on nectar. The larvae are predatory and their role as a biocontrol for aphids and small caterpillars is being investigated, with some success.
Hover flies will visit a range of flowers. The nectar is used for energy, while the protein in the pollen is needed for egg development - in the same ways female mosquitoes need blood to produce viable eggs! 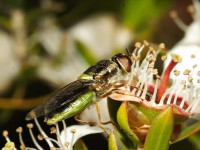 Green soldier fly (Beris spp.)
native
These flat, green shiny flies visit a range of flowers and can be quite common on some plants from January-February. The flat maggots are found in rotting vegetation. 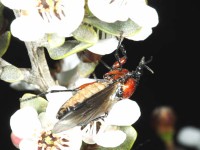 March fly (Dilophus nigrostigma)
native
Males of this species are entirely black, while females (pictured) are red at the front, grey at the back. They can be found feeding in a range of flowers in spring (March fly comes from the Northern Hemisphere where it is spring in March). Their maggots feed on rotting plants on the ground.

Flies
New Zealand has many species of flies, and many of these will visit flowers, pollinating them in the process. Identification can be tricky and it is best to ask an expert for help for an accurate identification. 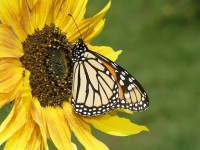 Monarch butterfly (Danaus plexippus)
self-introduced native
This is probably the most recognisable butterfly in New Zealand. Adults are nectar feeders and may be found throughout the year, sometimes in swarms. The caterpillars feed on the swan plant (Asclepia fruticosa) and some other milkweeds. 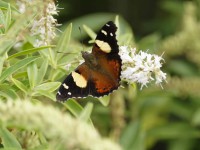 Yellow admiral (Bassaris itea)
native
Adults of this butterfly hibernate during winter, and old, battered survivors can be seen the following summer feeding on nectar. It is less common than its close relative, the red admiral, but can be found in gardens during summer. The caterpillars feed on nettle (Urtica spp.) plants. 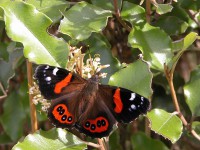 Red admiral (Bassaris gonerilla)
native
Adults can be found throughout the year, but it is most common in summer. The red admiral is a strong flier, seen in native forest clearings, on forest edges and also in home gardens, where it will feed on nectar or sap oozing from plants. The food plant for the caterpillars are nettles (Urtica spp.), especially the large native nettle Urtica ferox. 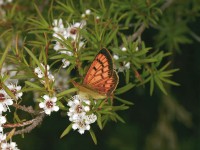 Copper butterfly (Lycaena spp.)
native
Several species are found in New Zealand from the coast to apline regions, with the most common being the common copper (how original!). The caterpillars feed on Muehlenbeckia leaves. This species overwinters as caterpillars. 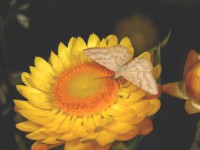 Moths
New Zealand has many species of moths, and many of these will visit flowers, especially at dusk and dawn. Identification can be tricky and it is best to ask an expert for accurate identification. See posting insects for how to send insects in the mail. 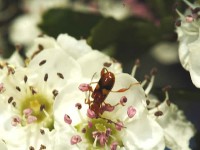 Flower longhorn beetles (Zorion spp.)
native
These tiny and strikingly coloured beetles can be found in a range of native flowers. The variation in their colour is such that experts have yet to decide how many species there are. They breed in dead branches or under the bark of many different trees , but little else in known of their biology.

New Zealand has a mix of both native (always been here) and exotic (brought in by humans – either deliberately of by accident) birds. The table below lists some of our main bird pollinators. Text and images courtesy of Abe Borker. 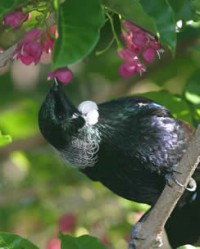 Tūī (Prosthemadera novaseelandiae)
native
Tui are the larges honeyeaters found in New Zealand at 30cm in length. they visit a variety of native trees with small and large blossoms. They often establish a territory and can be very aggressive over a nectar source. They have a conspicuous white tuft of feathers on their neck. Tui are fairly widespread in New Zealand except for parts of the South Island and can be found even in suburban landscapes. 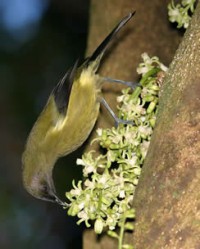 Bellbird / Korimako (Anthornis melanura)
native
Bellbirds are about a third of the weight of a tui and measure 20cm long. They pollinate a diverse est of plants where they occur south of Northland and like the tui can transcend both wilderness and human domesticated landscapes. The males are generally olive green, females are browner, and these birds are known for their beautiful melodic song. 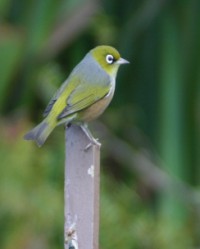