Tikumu is not so commonly used by weavers today, but was once a special resource for some purposes, particularly in the South Island.

The silvery underside (tomentum) was peeled from the leaves of large mountain daisies and attached in rows to a whītau (fibre) kaupapa (underlay) to create a raincape. The soft white down was also worked into the whītau to make a garment waterproof. The leaves were packed into leggings and shin protectors for warmth and to guard against thorny plants. The early colonists used the down as a wound dressing.

Tikumu are large-leaved mountain daisies. They belong to a large and complex group in the genus Celmisia that are widespread and often abundant in New Zealand mountain grasslands and herbfields.

In the North Island the name tikumu refers to Celmisia spectabilis. In the South Island, tikumu usually refers to C. semicordata, but is used for C. spectabilis as well. And to confuse the issue, older records use Celmisia coriacea for tikumu. C. coriacea is now included in the species C. semicordata.

Most other similar large South Island mountain daisies that may be confused with or are also called tikumu have restricted distributions. These include C. verbascifolia, found on wetter mountains from about Nelson Lakes southward, C. verbascifolia var. rigida on Stewart Island, and C. monroi in Kaikoura/Marlborough.

Tikumu are large silvery tufted perennial herbs. The foliage forms a typical daisy ‘rosette’, with tightly packed, overlapping leaves radiating out from short central stems. Rosettes occur singly or more commonly in small to large clumps. The leaves are leathery, usually stiff and elongated with nearly parallel veins, about 15 cm long in C. spectabilis and 30 cm long in C. semicordata, but sometimes reaching as much as 50 cm. Fine silver hairs on the upper leaf surfaces impart a pronounced silvery hue, while a dense mat of soft white hair (tomentum) provides a felted cover to the lower leaf surface.

Tikumu are often a prominent member of montane, subalpine and alpine grassland communities and fellfields (rocky debris slopes) throughout New Zealand’s mountains, although they also descend to sea level on coastal cliffs in Marlborough, north of Greymouth, and in Fiordland.

Tikumu are often a prominent member of montane, subalpine and alpine grassland communities and fellfields (rocky debris slopes) throughout New Zealand’s mountains, although they also descend to sea level on coastal cliffs in Marlborough, north of Greymouth, and in Fiordland.

The smaller C. spectabilis is found along the North Island axial ranges, on the central volcanoes, and coastal hills in eastern Wairarapa. In the South Island it occurs in the mountains of Northwest Nelson, Marlborough and the dryer ranges east of the Main Divide.

Although absent from the North Island the large mountain daisy C. semicordata occupies a wide range of sites throughout the South Island, but is most common along and west of the Main Divide of the Southern Alps, among tall tussock grasslands especially on wetter sites. It is also common in the ranges of Otago. 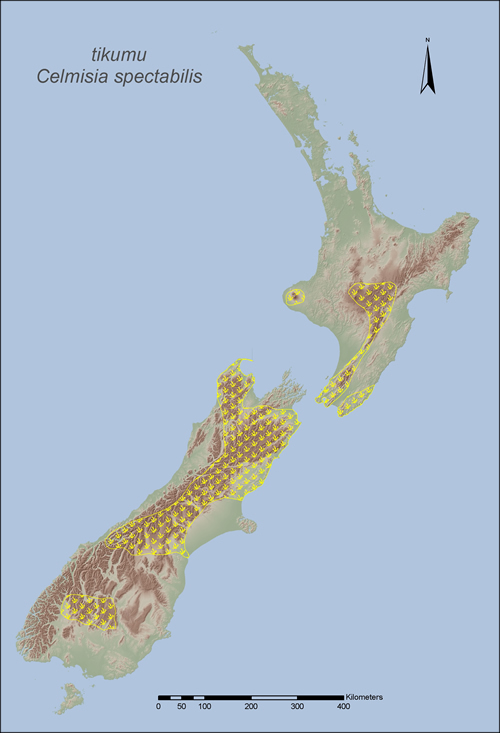 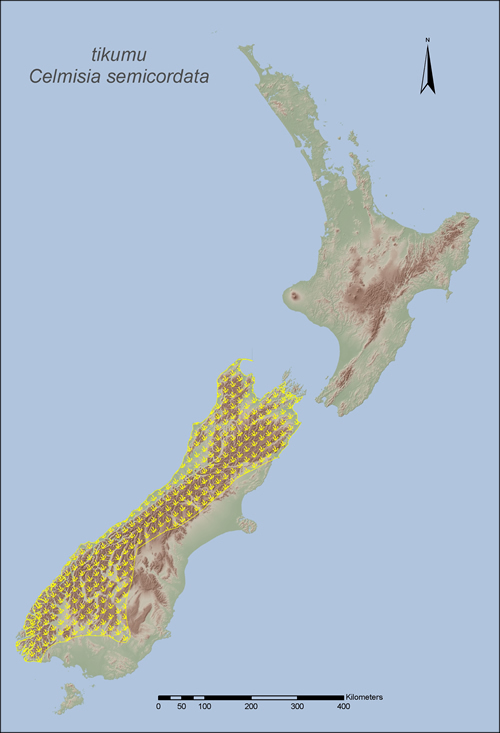 Tightly packed developing leaves and both living and dead leaf bases protect the growing tips and short stems of tikumu, giving it considerable tolerance to fire. This attribute, together with tolerance to browsing by introduced animals, enables tikumu to rapidly invade sites disturbed by burning, grazing and erosion. As a result, tikumu has increased in abundance considerably, particularly on grazing lands in the east of the South Island. It is a characteristic plant of thar 'camp sites'.

Not difficult to grow if provided with a well-drained, deep, moist soil, containing plenty of compost. In regions with hot summers it is best placed in lightly shaded sites. It is easily grown from seed, and mature plants can be carefully divided. Plants are prone to sudden death, possibly from fungal diseases.