Neinei and inanga are among our most distinctive plants. They look rather like trees drawn by Dr Seuss, with clusters of cabbage-tree-like or grass-like leaves borne in clumps on the tips of their branches. They are in the genus Dracophyllum (Epacridaceae, the heath family) which contains 27 native species, many of which are hard to distinguish.

The species called neinei and inanga (inaka in the south) are widespread. Their long, stiff, gleaming leaves are used by weavers for decorative features, such as tags on cloaks. The wind-bent branches of inaka were used by muttonbirders to build small round whare (whare pōtaka) on the Titi Islands in Foveaux Strait.

The two dracophyllums called neinei belong to a subgroup of five species of small trees that are characterised by large, strap-like, down-curved leaves that are tightly bunched at the end of the main stems or branches.

Dracophyllum latifolium occurs only in the northern half of the North Island, mainly in mixed forests around Auckland and Northland, but also in beech forests in the Raukumara Range and the Urewera, and sparingly in the Kaimai Ranges and Taranaki hill country.

Sections of the stem of D. latifolium are marked with a web-like pattern leading to the common name spiderwood. It is generally a more slender, upright tree than mountain neinei.

The leaves are stiff, leathery and shiny, with minute serrations at the margins. They are 25–60 cm long, 2.5–3.5 cm wide at the base, tapering gradually to a long, fine pointed tip. The young tree stems are marked with numerous rings left by leaves that have dropped off.

The flowering stems are slender, usually up to 30 cm long (though sometimes longer), and arise singly from the tips of branches. Flowers are reddish, small and numerous. The tiny seed capsules release prodigious numbers of minute dry seeds. 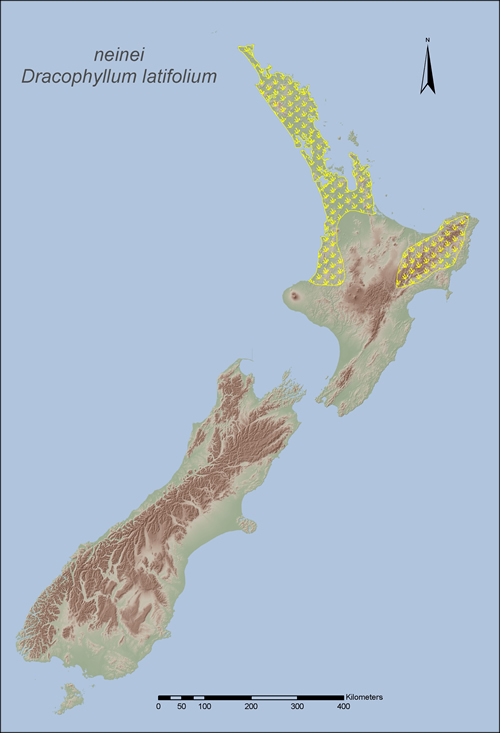 Mountain neinei is mainly a South Island species, occurring in montane and subalpine heath forest and scrub, often with tree daisies (Olearia spp.) on wetter mountains from Northwest Nelson to the central Southern Alps. It is also found on Mt Hikurangi in the Raukumara Range, in the Coromandal Range, and in scattered western localities between the King Country and Whangarei. Mountain neinei often dominates localised patches of forest, sometimes forming extensive stands along ridge crests.

The tree usually has a gnarled and spreading habit, with peeling bark on the trunk, and smooth, dark brown to almost black branches. The leaves are a similar length to spiderwood, but a little wider with smooth margins. The sheath by which the leaf is attached to the branch is 3 cm long. When the leaves fall they turn red-brown and persist for a long time on the forest floor – unless they are picked up by weavers! Their slow decay produces deep, slippery litter layers that prevent seedling regeneration.

Mountain neinei is the longest living of our indigenous small trees, with individuals recorded at between 500 and 600 years old. Flowering is sporadic but when heavy an individual tree could produce 750,000 seeds. The seeds are one of the smallest in the New Zealand flora, measuring 1 mm long and weighing only 0.00007 g. Because of their tiny size, the seeds are easily dispersed by wind. Despite this seed output, seedlings are rare, but this paucity is compensated for by the longevity of established plants. 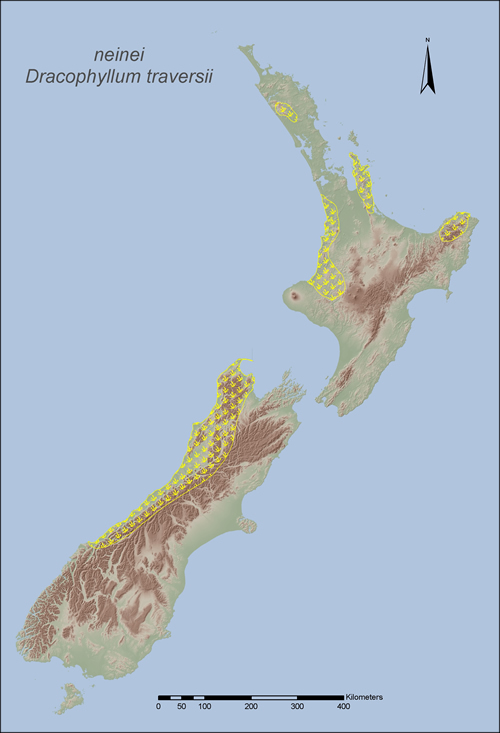 The other three Dracophyllum species in this subgroup (D. townsonii, D. menziesii, D. fiordense) are smaller plants than neinei with restricted western South Island distributions. They all have similar leaves to neinei, and can be used in a similar manner.

The appearance of inanga depends on the local growing conditions, which can make it confusing to identify. It is widely distributed, growing from the North Island East Cape to subantarctic Campbell Island. It is most abundant in the the subalpine and low alpine forests and scrub of the South Island, particularly in the western Southern Alps and Stewart Island.

It forms small trees in montane-subalpine forests, but only attains the status of small shrubs in alpine shrublands and some bogs. There are variations within the species and it also hybridises with other Dracophyllum species.

The shrubby inanga grow without a distinct trunk, and with narrow angled slender branches. On steep slopes the main stem is often leaning or horizontal, and branches may take root where they contact the ground, a process called layering. This can lead to extensive patches, all belonging to one genetic individual.

Many of the 27 New Zealand species of Dracophyllum fit the generalised description of inanga, having stiff needle-like leaves in clusters at the ends of slender branches on bushy shrubs. However, most of the other small-leaved dracophyllums (as opposed to the large-leaved neinei) do not have leaves that approach the lengths seen in inanga.

The pale green or bronze leaves are usually stiff and narrow (3–5 mm wide, but up to twice as wide in young plants) but usually at least 8 cm, and as much as 25 cm long. As in all dracophyllums the base of the leaf has a broadened sheath (about 15 mm long in inanga) that encircles the stem. Branches are conspicuously marked by rings left by cast leaves. Up to 15 small white tubular flowers are borne on short stalks held just behind the tufts of leaves. Fruits are small dry capsules that release minute (20,000 seeds/gram) dry seeds.

Inanga is another long-lived plant, up to 220 years. Its longevity combined with its ability to layer means that inanga may persist indefinitely once established, even without further seedling regeneration, at least until further disturbance creates new bare ground.

Neinei and inanga are not too difficult to raise from seed, which should be sown when fresh. The seeds ripen between February and May. Germination is greatly enhanced after several weeks of temperature stratification (4°C), in moist conditions. Mix the seed with a little fine damp peat or sand and put in a polythene bag in the fridge. After 12 weeks, scatter the seed on seed mix, then top with a single layer of coarse grit or 10-mm stone chips. Use of grit should delay the growth of liverwort and moss, which can easily smother the slow-growing little plants and needs to be carefully removed. Germinate in cool conditions. It is likely to be a year or more before the seedlings are big enough to prick out into larger containers.

Because their shoots are very thick, it is unlikely that neinei can be grown from cuttings.