Kiekie is a many branched woody vine, with tufts of long leaves. It is arguably the most valued weaving plant after harakeke. Strips split from the leaves are boiled, rinsed and dried in the sun, which bleaches them white. They are pliable and easy to work. The leaves also absorb dyes well. Kiekie is often used in the making of fine, soft mats for wharenui and in creating tukutuku panels. Kiekie is the only New Zealand member of the tropical Pandanus family, which is widely used in the Pacific for weaving. 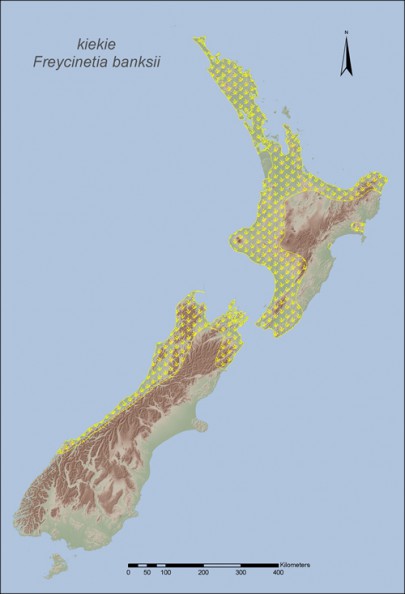 Kiekie is distributed widely in North Island lowland forests, and is found as far south as the Clarence River on the South Island east coast, and to Milford Sound in the west. Kiekie grows best in areas of moderate to high rainfall.

Normally the kiekie vine attaches itself by roots to the stems of trees, but if not supported will scramble along the ground, forming dense, sometimes impenetrable tangles. As a seedling develops, the stem thickens, eventually up to 40 mm in diameter, and produces leaves up to a metre in length, spirally arranged in dense tufts. If the growing tip is damaged, the stem will resprout and branch from another bud.

The leaves are finely toothed on the edges and have a keeled midrib and two whitish raised ribs on either side of the keel. The two halves of the leaf are separated down the midrib. The whitish ribs are where the strongest fibres lie, and are included in the strips that a weaver prepares for raranga.

Leaves are best harvested by grasping a bunch of about 20 leaves and wrenching them from the tuft. Harvesting leaves using this traditional manner does not harm the plant, and in fact encourages resprouting from the damaged site. Cheri van Schravendijk has completed an MSc on the effects of different harvesting procedures on the regrowth of kiekie. A summary will soon be linked to this site.

A flowering kiekie plant is a spectacular sight. Kiekie is dioecious (pronounced ‘die EE shus’), meaning that an individual plant has either male or female flowering parts. Both flowers and fruit are borne on woody spikes up to 15 cm long, which emerge in spring from the middle of the leaf tuft.

The male kiekie produces several beige-brown stamen that are enclosed by whitish, succulent and fleshy bracts (modified leaves) called tāwhara. These are very sweet-tasting and were a highly desirable food.

The female plant develops three or four fruit (called ureure), with green remnant flower parts (carpels) on the surface. These fruits are also surrounded by fleshy bracts, though not quite as luscious as those of the male plant. The green segments swell and become pinky brown as the fruit ripens in late autumn (May). The rough surface can be peeled away to reveal the sweetish pulp on the inside.

It is customary to protect the bracts and fruit from rats by tying leaves over the flower spikes. Today, possums are also quick to get to the fruit, and it seems they may help with dispersal of the seed.

Pests and diseases of leaves

A common sight on kiekie leaves are yellow spots, which can be quite large and present on a large portion of the leaf. Sometimes these spots are caused by insects such as scale, or one of the rusts and fungi that affect many plants. More commonly, these are called ‘sunspots’ and there is no sign of fungal or insect attack on the leaf. The so-called sunspots don’t affect the health of the leaf unduly, but can be a nuisance to weavers wanting unblemished material.

Sooty mould is a fungus that appears as a black coating on kiekie leaves. It is caused by insect honeydew dripping onto the leaves from overhanging trees or directly secreted onto the leaves by scale insects and aphids. Mould spores are always present in the forest air, and the sweet, sticky honeydew is a perfect medium on which they can grow. When the spores germinate on the honeydew they send out black fungal strands that spread over the leaf, causing discolouration.

Sooty mould can be washed off the leaves, though if the infestation has been very thick, the leaf may be damaged through loss of chlorophyll. These discoloured leaves can still be dyed.

In the right conditions, kiekie grows easily from seed and from cuttings.

Kiekie does not flower prolifically very often, so the seed may not be easy to collect, though each fruit contains many hundreds of tiny seeds. The seed from the ureure is collected in early winter but will not germinate until the spring. It should be kept moist. The tiny seeds are best placed on media found in nature, such as humus, rotting wood, or punga stems. The seed does not germinate well in soil, and needs light to germinate – do not cover. Kiekie seedlings are vigorous and appreciate support (perhaps a log, or a tree fern).

The easier way to propagate kiekie is vegetatively, by planting a piece of stem with roots attached. In the right medium and with plenty of moisture, the kiekie should grow easily. Keep in partial shade and provide support for the growing vine.