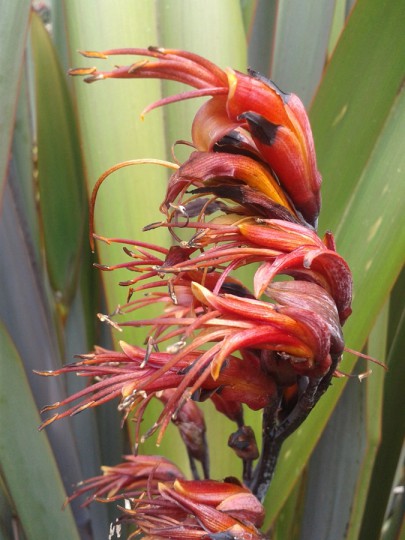 “The named varieties of flax are very numerous, but they are not generally and accurately distinguished even amongst the Natives themselves; and there is no doubt that the same variety has often a different name in different districts… There has been no opportunity yet of satisfactorily fixing the varieties; and it will be only when plants from all parts of the island have been collected at one place that they can be compared, and an accurate list compiled.”
Report of the Flax Commissioners 1870. AJHR G-no4 p.68

We’ve long been aware that several of the harakeke within the Orchiston Collection of weaving varieties are very similar to each other. The leaves and bushes have the same colourings and form, and the special qualities are consistent, whether for raranga or muka/whītau. They do, however, have different names and have been collected from different places.

It’s interesting reading the old accounts of harakeke cultivation, such as the 1870s reports of the Flax Commissioners, who travelled New Zealand collecting any information about harakeke that could help in establishing a commercial flax industry. Many of the cultivars listed in these early accounts are not described in detail, making it mostly unfeasible to reliably match the name with existing cultivars, even though many of the names are still in use.

Information on where Rene collected the 50 cultivars in her collection is mostly limited to region, rather than to a specific person or hapu. And because weavers have always gift-exchanged desirable harakeke selections, we cannot be sure of the original provenance of the plants.

As part of the assessment of harakeke in the National Collection, and to enable screening for yellow-leaf disease, we have carried out DNA fingerprinting of all the varieties. Most of the plants in the Orchiston Collection are unique varieties, but several groups with identical genetic makeup were identified. These plants are either close kin (originally from the same geographical area or wild population) or vegetative clones (divisions) of the same parent plant.

Two years ago, the late Mick Pendergrast wrote an interesting feature for the magazine published by Te Roopu Raranga Whatu o Aotearoa on the origins of the harakeke variety “Makaweroa”. Mick was given a division of this lovely whitau or muka flax by Marara (Garn) Maihi of Torere. At that time, in the mid-1950s, Mick said that only Garn had this plant in Torere, in a pa harakeke that was later bulldozed to make way for new houses. Mick gave a division to the late Rene Orchiston, and it is one of the highly prized plants in the collection that she put together.

We now know that Makaweroa is the same plant as the varieties Arawa, Ruapani, Taumataua and Opiki. They not only look similar, but are all excellent muka varieties with strong, silky fibre, easily extracted. All apart from Opiki were collected by Rene on the East Coast and Bay of Plenty regions. With such excellent fibre, it is not surprising that they have been shared through the wider region, and acquired different names along the way.

Opiki is a different story. It is described by Rene as an all-purpose flax, lacking the superior fibre qualities of the other cultivars in the group. Yet the Opiki in the current collection certainly can’t be distinguished from the others. This apparent anomaly, however, reinforces my opinion that the Opiki held in the National Collection is, in fact, Arawa. I was present when the divisions were first taken from bushes at Rene’s place in 1987. The large bushes were growing very closely together and not always easily distinguishable. Arawa and Opiki were growing next to each other. It is my opinion (formed once the clones matured 4 years later) that the division was taken from the wrong plant.

Having said that, it’s also true that good muka varieties were sourced from Maori and grown in the Manawatu in the flax industry days. One of these varieties is Tapamangu. Many of the varieties named “Seiferts” are the same as Tapamangu. The “unknown” variety that Te Aue Davis gave to Rene is also Tapamangu.

One of the more intriguing groupings is the variegated Parekoritawa being close kin of Tapoto and Ruahine. It seems strange to say that a striped plant is the same as a green-leaved variety - but on any Parekoritawa bush, a number of the leaves revert from sulphur-yellow striping to wholly green, and these leaves look strikingly similar to Tapoto. Leaf and fibre qualities are also similar. It is possible that these cultivars all came from the same parent plant and that their variable appearance (variegated or non-variegated) is the result of cell mutation since they came into cultivation.

In autumn 2007, we divided all the harkeke in the Collection and replanted it. Since then we’ve been making regular observations of the plants as they’ve matured. These varieties are too similar in form, growth habit, leaf colour and shading to be distinguished. Old plants of these cultivars in the reference collection grown at Havelock North also looked just the same. DNA evidence supports these observations.

These varieties are  relatively soft leaved plants, yellow-green, with korari that grow at an angle, and capsules with a twist, suggesting they are hybrids between harakeke (Phormium tenax) and wharariki (P. cookianum). All are among the first of the cultivars to flower, just as wharariki flowers earlier than harakeke. It is difficult to distinguish Wharanui, Mawaru, and Tārere, but Paoa has thicker and firmer leaves. The DNA evidence doesn’t necessarily mean the plants are exactly the same and interchangeable. They perhaps originated as divisions from the same parent plant, and any differences, such as Paoa’s stronger leaves, are the result of cell mutation since they came into cultivation. Alternatively, they may share a similar geographic origin but not come from exactly the same parent plant.

Rene described Potaka as similar to Ruawai, both in appearance and weaving qualities. Both were obtained on the East Coast.

Te Tatua and Whareongaonga were both acquired around Gisborne. Rene made some distinctions between them in her descriptions, but to our eye they look the same in form, leaf colour, korari shape and seedpods, and have similar weaving qualities.

Other varieties in the Orchiston Collection have similar profiles, which may also indicate kinship, but to what degree, and whether as a result of breeding before or after entering cultivation is not clear. For example Atewhiki and Te Mata have distinctively coloured leaves that make them attractive as ornamentals, and may have been collected and redistributed as garden plants.

Ngaro and Atarau also share similar profiles. Ngaro is a tall variety with stiff, bronzed leaves, and thick, strong fibre that shows through on the surface of the leaf. Ngaro was very popular with flax millers and was used in breeding research at Moutoa Estate in Manawatu in the first half of the 20th century (Rene obtained Ngaro from Moutoa). Atarau has a very similar DNA profile, and many of the same physical characteristics as Ngaro (thick, bronzed leaves, extractable fibre though not as strong). It was located by Rene in Whanganui and it is possible that it shares a similar geographic origin to Ngaro. Various reports state that Whanganui flaxes were well regarded by early Maori weavers and flax millers.