Scotch thistle (Cirsium vulgare) is one of the most common thistle weeds in New Zealand, being present in all regions of the country in a diversity of habitats. The weed is a prolific seed producer, with an average of 200 seeds per seedhead, and individual plants can produce over 50,000 seeds. Scotch thistle is most problematic in grazed pastures, where it reduces pasture productivity by competing with desirable forage plants. An added problem is the loss of the pasture legumes if phenoxy herbicides are used to control this weed. 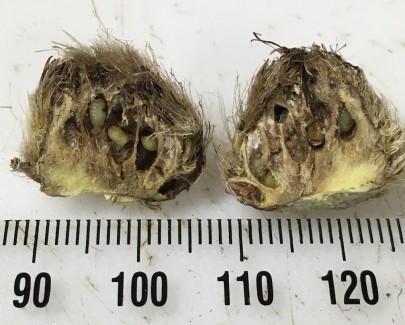 The Scotch thistle gall fly (Urophora stylata) is native to Europe and is a classical biocontrol agent for Scotch thistle that was released in New Zealand in 1998. The adult flies are active in spring, and females lay eggs on the green flower buds. Multiple larvae feed inside the seedheads during summer and autumn, destroying the seeds. Larval feeding stimulates the plant to form gall tissue, which results in the formation of a hardened woody gall, the size of which depends on the number of larvae present.

The gall flies were released at a limited number of sites up until the early 2000s and are known to be established and widespread. It is also known from studies on the same insect–weed system in Canada that the gall fly has great potential to reduce seed production (up to 60% of Scotch thistle seeds are destroyed in Canada). However, until recently the gall fly’s impact on seed production in New Zealand had not been quantified, although a noticeable reduction in Scotch thistles had been observed at several release sites.

In the summer of 2018, 20 years after the first release of the gall fly, a survey was carried out to assess its impact on Scotch thistle. The surveys were conducted by Jovesa Navukula and Mike Cripps (AgResearch). Jovesa was a New Zealand Aid Scholar from Fiji, who was co-supervised by Mike and Seona Casonato (Lincoln University). “For the surveys, we randomly selected 10 sheep and beef pastures in the North Island and 10 in the South Island, and then located the nearest Scotch thistle population to the selected points,” explained Mike. “The assistance of extension managers from Beef+Lamb NZ was essential for contacting farmers who could help to find suitable paddocks with Scotch thistle,” he added.

After a busy field trip covering all regions of New Zealand, Jovesa took on the task of dissecting over 1,500 seedheads, taking meticulous measurements of galls and counting thousands of seeds. The fly was detected at 14 of the 20 Scotch thistle sites surveyed. Overall, the gall fly reduced the number of seeds per seedhead by 47%, individual seed weight by 21%, and seed germination rates by 30%. Estimated seed reduction for populations ranged from 11 to 61%.

“These findings were very encouraging, because seed reductions of 60% by the nodding thistle gall fly (Urophora solstitialis) are enough to provide an acceptable level of control of nodding thistle (Carduus natans) in New Zealand,” explained Mike. “This requires further evaluation, but it does suggest that the Scotch thistle gall fly has the potential to be as effective as its close relative on nodding thistle.” Another important finding was that feeding damage by the gall fly larvae not only reduces seed production, but also reduces the viability of the remaining seeds within the galled seedhead.

Lastly, the study showed a strong latitudinal trend, indicating that the effectiveness of the gall fly increased from south to north, being most effective in northern New Zealand, where Scotch thistle seedheads are intensely attacked. “Next, we need to assess the impact of the gall fly on the population dynamics of Scotch thistle to determine if additional control measures are required, particularly in the South Island, where the gall fly appears to be limited by climate,” concluded Mike.

This project was funded by AgResearch Strategic Science Investment Fund for Pasture Weed Ecology and Management.