Sadly, Robin van Zoelen, a Biosecurity Officer for Tasman District Council, and a stalwart of the National Biocontrol Collective (NBC), passed away in September aged 64. Rob had battled leukaemia on and off for 12 years. He was so passionate about weed biocontrol that he chose to leave his sick bed to attend the NBC annual meeting in Wellington in October 2020 rather than miss it.

Robin was a fantastic supporter of weed biocontrol activities in New Zealand for 36 years. He thoroughly enjoyed all aspects of the work, from releasing, monitoring, and reporting on the progress of weed biocontrol agents, to organising ‘swapsies’ with other regions, and speaking to community groups and schools about this work.

“Robin told me many times that the weed biocontrol work was where he felt he could make the biggest difference and leave the greatest legacy. It was always fun going out in the field with him. He loved to tease me about gorse thrips at every opportunity since they were so small and underwhelming in terms of impact. However, Robin was delighted that the agents he released against ragwort, and nodding and Scotch thistles, led to substantial declines in these weeds.”

“He was also excited to see inroads being made into broom and tradescantia due to the agents released more recently against these targets. It is a shame Robin did not get to see agents released against banana passionfruit (he was the NBC project representative for this project for a number of years) or get to release the new mite against another of his old arch enemies, old man’s beard.”

“Robin was a patient man, a quality you certainly need when working with biocontrol. We also really appreciated being able to tap into Robin’s excellent memory about how weed problems in the Tasman District had changed over the last four decades, and the excellent photos he took and shared.”

Thanks Robin, for all you did to support our work at MWLR. You will be missed! 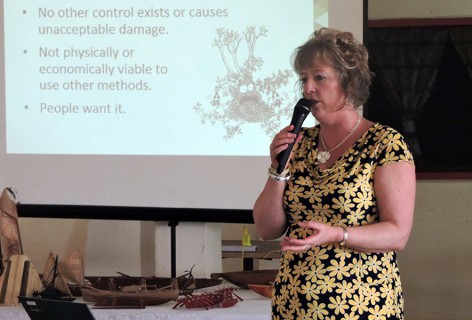