The heather beetle (Lochmaea suturalis) has population outbreaks in its native range in the United Kingdom, periodically causing devastating and unwanted damage to vast swathes of its host plant, heather (Calluna vulgaris). The heather beetle was therefore an obvious choice for biocontrol of invasive populations of heather in New Zealand. 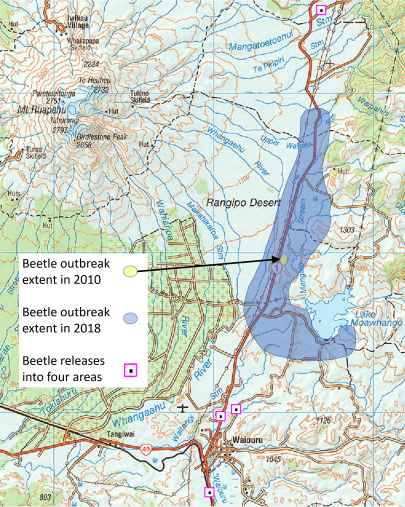 However, to the surprise of everyone involved, the beetles initially all but failed to establish, despite the high number of releases conducted between 1996 and 1998. Only one small population survived from a total of 18 releases carried out in Tongariro National Park (TNP) in the North Island over the 3-year period. “Subsequent post-release research identified several factors likely to have contributed to the dismal establishment success of the beetle in New Zealand,” said Simon Fowler, who leads the project. “These include harsh climatic conditions of the region, poor nutritional quality of heather foliage in TNP, Allee effects, and a severe genetic bottleneck,” he added. Despite the low establishment rate, the one and only successful beetle population slowly increased, eventually allowing collection and redistribution to other heather sites in TNP in the 2000s.

“Several of these new beetle populations started to increase nicely, particularly along the Desert Rd just north of Waiouru, which was monitored closely,” said Paul Peterson, also a researcher on the project.  This population of heather beetles continued to increase and spread, and by 2010 had severely damaged an estimated 17 hectares of heather.

“Then things really started to heat up from 2010 onwards,” said Paul. The beetle populations started to disperse rapidly, establishing themselves on heather in and around TNP, causing extensive defoliation of vast stands of the weed. “It was difficult to keep up with the spread of beetles and to estimate the size of the damaged area,” added Simon. “In late 2018, we drafted a press release with the Department of Conservation which stated that an estimated 5,000 hectares of heather had been damaged in and around TNP. By the time the article was published in early 2019, the estimate was closer to 10,000 hectares”. The fact that new populations were establishing so readily in new areas, spreading so quickly, and performing so well, suggested that something had changed radically to improve the beetles’ performance.

While marvelling at the impressive damage and range expansion of the beetles, the researchers began to wonder whether they had adapted to cope with some of the rigours of the TNP environment, after almost failing to establish in the 1990s. To test this hypothesis, they first needed to determine whether establishment success had indeed improved, or whether the high beetle densities were purely the result of exponential population growth. To test this, Paul made experimental releases in four areas where beetles had not yet dispersed in 2018, and monitored their establishment.

The result was amazing: 12 heather beetle populations established from a total of 14 experimental releases (85.7%). This is in comparison to a success rate of only 5.6% in the 1990s, and 38.9% in the 2000s, when 7 out of 18 releases were successful. This demonstrates a clear trend for increasing establishment success of the beetles over more than two decades, with the researchers concluding that the beetle explosion in TNP in the past decade is the result of adaptation. 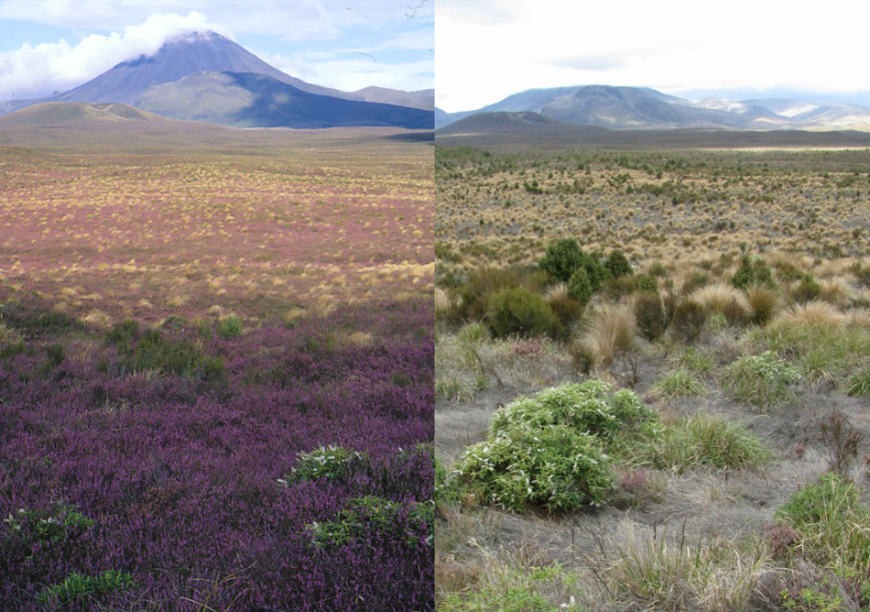 However, adaptation by the heather beetle to the rigours of TNP is not the only possible explanation for the dramatically improved establishment rates. Environmental stressors in the TNP region may have been reduced as a result of environmental change. For example, climate change may have ameliorated critical aspects of the harshness of the TNP climate, such as shorter, less severe winters, less severe late frosts, and less snowfall in spring. Also, possibly increased air pollution may have resulted in higher nitrogen deposition on the nutrient impoverished soils of TNP, resulting in increased nitrogen uptake by heather and increased foliar nitrogen levels for the beetles (a critical element for insect growth and survival).

“We are currently testing these hypotheses by comparing the current climate and nitrogen levels with recorded data from earlier decades. If altered environmental conditions fails to explain the dramatically improved establishment success of the beetles, then adaptation to local conditions will be the more likely explanation,” explained Paul. Demonstrating genetic adaptation will be difficult, but the following adaptive changes may be indicative: i) an increase in beetle body size, which previous research demonstrated improved overwintering survival; ii) changes to post-overwintering physiology or behaviour, resulting in increased beetle survival in the spring; or iii) improved ability of the beetles to obtain nitrogen from nutrient-deficient heather.

While solving this mystery will take some detailed investigation, heather beetles continue to spread and do the job they were released to do. Dense heather monocultures are fast becoming a thing of the past in and around TNP, and this is now one of New Zealand’s great biocontrol success stories, 25 years on.

This project was funded by the Ministry of Business, Innovation and Employment as part of Manaaki Whenua – Landcare Research’s Beating Weeds programme.