Identity Crisis for a Weed of the Pacific

Taro vine (Epipremnum pinnatum cv. Aureum), also known as Devil’s ivy, is a perennial epiphyte (a plant that uses another plant as a substrate) of tropical and subtropical regions that has become invasive in many countries and territories in the Pacific, including the Cook Islands, Hawai’i, Marshall Islands, Micronesia, Palau, Samoa, Tonga, and most notably Niue. It invades natural and anthropogenic environments, growing across the ground up to the tops of tall trees. Its smothering growth displaces native flora and prevents seedling establishment, as well as killing host trees. Taro vine has the ability to reproduce vegetatively, growing readily from tiny fragments, making large infestations very hard to control by conventional methods. The severe disruption taro vine causes to Pacific Island ecosystems made it a high priority for investigating the feasibility of developing a biocontrol programme for this weed. 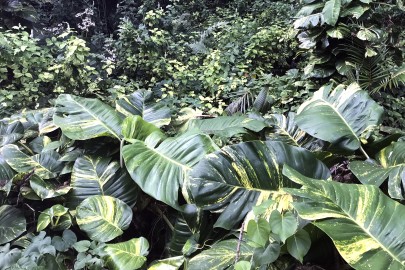 “It is fair to say that taro vine has a convoluted taxonomic history – one that has yet to be fully resolved,” said lead author of the feasibility study, Chris McGrannachan. “Taro vine has gone through several name changes since it was first described in 1880 and even presently, there is no firm consensus as to the correct taxonomic nomenclature of this species,” he added. Online databases, as well as scientific and grey literature, interchangeably list taro vine as Epipremnum pinnatum E. aureum, or E. pinnatum cv. Aureum, making it difficult to reliably ascribe some information to the species of concern or to rely upon the accuracy of information. The confusion surrounding the true identity of taro vine has also led to different native origins being recognised, including Asia, Australia, French Polynesia, and the Solomon Islands.

“What we do know is that taro vine can have major detrimental impacts on native ecosystems if left unchecked,” explained Chris. “Control methods such as herbicide applications or physical removal are time and labour intensive, with repeated treatments required. And, these conventional management methods are near impossible to employ due to the ecology of the weed,” he added. Herbicides also kill the host trees, since the herbicide is translocated to tree trunks via the penetrating roots of taro vine. Physical or mechanical removal often results in fragments remaining high in the unreachable canopy, which quickly regrow. A scorched earth approach is often the only possible control method, but this is at the expense of killing native vegetation, as well as the host trees. The lack of effective management methods makes biocontrol a highly desirable control option for managing taro vine. A feasibility study was the first step towards determining if taro vine is a viable biocontrol target.

Biocontrol has never been initiated against taro vine, and little research has been conducted on its natural enemies. Through literature and database searches and consultation with international experts, five arthropods, 47 fungal pathogens and five algal or bacterial pathogens were identified as being associated with taro vine. Unfortunately, none of these species are suitable as biocontrol agents because they have broad host ranges, are unlikely to cause significant damage, and/or are invasive themselves.

“To conclude, the feasibility study makes two recommendations before the viability of a biocontrol programme targeting taro vine can be fully evaluated,” said Chris. “Firstly, it will be essential to conduct molecular studies on taro vine populations from the entire Pacific region as well as other regions such as Asia to confirm the true identity of the species and its native range. Secondly, it will be important to conduct surveys in the Pacific Islands where taro vine is invasive to identify any natural enemies already present, and in the native range, to identify natural enemies that have potential as classical biocontrol agents,” he added.

Efforts are currently underway to enlist the aid of collaborators in the Pacific region to provide leaf samples of taro vine for molecular analysis. Surveys throughout the Pacific region are scheduled from mid-2022, Covid permitting. Once this research has been completed, a decision can be made regarding the next steps.

“Unfortunately, climate change is likely to exacerbate the spread and impact of taro vine,” said Chris. “Many countries in the early stages of invasion appear to be unaware of the threat taro vine poses. As such, our report also strongly recommends that greater efforts be made to raise awareness on taro vine, to eradicate where still feasible, and to take steps to prevent new infestations,” he concluded.

This feasibility study was undertaken as part of the Managing Invasive Species for Climate Change Adaptation in the Pacific (MISCCAP) programme, funded by the New Zealand Ministry of Foreign Affairs and Trade. Please contact us if you are able to provide leaf samples for the molecular study. 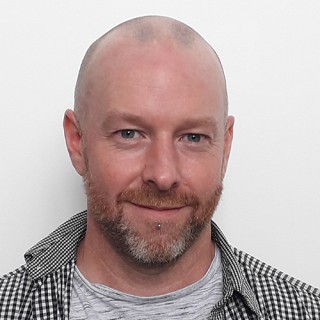