Buddleia (Buddleja davidii) is native to China and is a serious weed in plantation forests, natural habitats and riparian areas in New Zealand, especially in the central North Island. Also commonly known as summer lilac or butterfly bush because of its showy, dense clusters of purple or white flowers, buddleia is a deciduous, multi-stemmed Scrophulariaceae shrub that can grow up to 3 m tall, forming dense, self-replacing thickets. Buddleia has a wide ecological tolerance and establishes and grows very quickly, competing with seedling trees in plantations, displacing pioneer species in native bush, and invading loose gravel riverbeds and stream-sides, causing a build-up of silt after flooding. 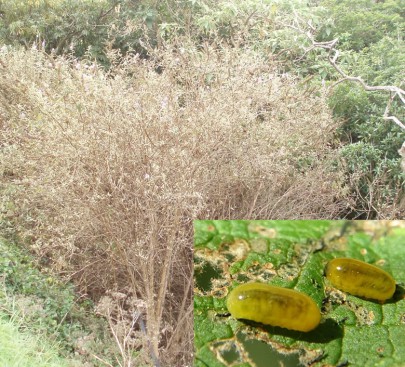 Because buddleia was a serious pest for the forestry industry, Scion initiated a biocontrol programme and imported the buddleia leaf weevil (Cleopus japonicus) from Hunan, China, into their containment facility in Rotorua in 1993. Both adult and larval feeding causes characteristic leaf scarring through removing the upper surface of a leaf, leaving the lower silvery epidermis intact. Leaves with extensive damage become silvery-brown, curl and drop to the ground. Adult feeding can also form ragged holes in the leaves, and heavily damaged plants become completely defoliated.

Host range testing of the buddleia leaf weevil was undertaken by Malcolm Kay and Dr Toni Withers (Scion), and approval for its release was granted by the Environmental Risk Management Authority (predecessor of the Environmental Protection Authority) in 2006. The first release was made in Rotorua in September 2006, and thereafter multiple releases totalling 15,000 weevils were conducted until 2011 in both the North and South Islands, on private and publicly owned land, as well as in conservation areas.

Although buddleia was not considered a significant weed in Northland, the weevils were pre-emptively released by Ken Massey (Northland Regional Council) in April 2008 at a roadside infestation of about 20 plants, 10 km south of Kaikohe. The site was revisited 2 years later, and Ken reportedly found severely defoliated buddleia bushes – indicative of establishment of the weevil. In the following 3 years entomologist Dr Jenny Dymock (Northland Regional Council) monitored the site. “I was delighted to find heavily defoliated buddleia bushes every autumn, although this was followed by regrowth of the foliage by June the same year,” said Jenny. “After a break of a few years, I finally returned to monitor the site earlier this year, only to find one very straggly buddleia bush remaining alive.”

According to Toni, who has spent many years working with the weevil, this kind of persistent and extensive defoliation year after year, which eventually kills even large buddleia plants, has been replicated in other parts of New Zealand. “The damage observed in Northland is very similar to our findings in Rotorua, where buddleia has become a rarity, bar a few isolated specimens,” said Toni. “The only areas where damage by the leaf weevil is not consistent is at the very edges of its climatic range, around Queenstown and Mt Cook, where we suspect the weevil population is knocked back each winter and recovers too slowly in spring to reach damaging densities,” she explained.

Overall, the buddleia biocontrol programme has been highly successful. "It’s always exciting to witness effective biocontrol in action,” enthused Jenny. “Now I can only hope we see similar results with other woody weeds in Northland. I’ve got my eye on lantana, for example, which loses 50 to 60% of its leaves every winter due to infection by the lantana leaf rust (Prospodium tuberculatum),” she added.

This project was funded by the Foundation for Research, Science and Technology (now the Ministry for Business, Innovation and Employment).