Just less than a year ago we revived efforts to search for effective fungal biocontrol agents for nassella tussock (Nassella trichotoma), and we are pleased to report that we have already made significant headway. This collaborative project between Manaaki Whenua – Landcare Research, Lincoln University and AgResearch in New Zealand, in conjunction with colleagues in Australia and Argentina, is “progressing extremely well” according to Seona Casonato (Lincoln University), who is leading the project. 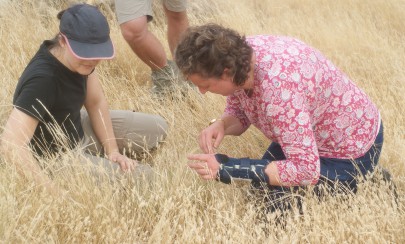 The research has two aims: to search for disease-causing micro-organisms (pathogens) that already occur on nassella tussock in New Zealand and could be used in an inundative or augmentative programme (e.g. through the development of a bioherbicide); and to revisit promising agents in Argentina and Australia that could potentially be used as part of a classical biocontrol programme. Irrespective of where a fungal biocontrol agent is sourced, it will hopefully provide a much-needed tool to help tackle nassella tussock infestations in New Zealand.

Nassella tussock is a perennial tussock grass infesting vast tracts of land in the North and South Islands of New Zealand, as well as in Australia. Over 600,000 hectares of land is already infected with this noxious weed in the South Island alone. Nassella tussock is unpalatable to stock and reduces the carrying capacity of pastures, with up to 90% loss in heavily infested pastures. Current management strategies predominantly involve manual removal (grubbing), which is costly and labour intensive, and chemical control, which can have non-target impacts on valued pasture plants. With the potential for climate change to exacerbate nassella tussock invasions in New Zealand, there has been an escalating demand for an alternative, effective method of control.

“It was with great optimism that we restarted the biocontrol project, even though we thought searching for fungal pathogens in New Zealand might be like looking for a needle in a haystack,” said Seona. “So, much to our surprise, we have already found a number of promising candidates.” Amber Brooks, a technician on the project, with the assistance of Michael Kuchar (Lincoln University), have already surveyed over 40 nassella tussock sites in Marlborough, Canterbury, Hawke’s Bay, Central Otago, Tasman and the Coromandel. During site visits the pair looked for tussocks that appeared to be unhealthy or were exhibiting symptoms, such as dying off, stunted growth, multiple flushes of seeds, ease of pulling from the ground, or areas where patches of tussock are no longer present. “At each site we spent most of our time examining nassella tussocks with a fine-tooth comb, searching for lesions, marks, discolouration, spots, or anything else indicative of fungal presence or reduced plant fitness,” explained Amber. 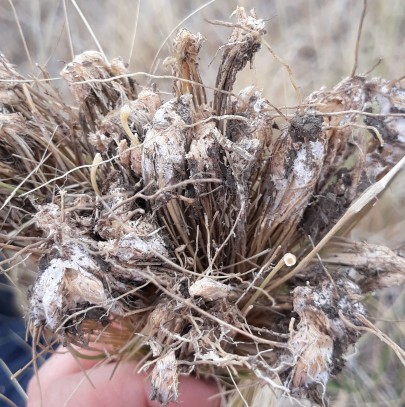 Back at the laboratory the project was supported by technician Jenny Brookes (Lincoln University), who had the onerous task of culturing, identifying and preserving any fungi that were collected in the field. Despite very dry conditions during the surveying period, over 100 fungi were isolated and identified using both diagnostic and molecular techniques. “Although most of these have already been disregarded for use as biocontrol agents, we have found some that are worth testing further, and which target various aspects of the plant’s phenology,” explained Seona. “We have even been fortunate to isolate a Dinemasporium species, which we found in Australia in the 1990s! This fungus was previously considered to have good biocontrol potential, and when it was found at the field site in New Zealand the plants looked sickly and were in decline,” she added. Another promising fungus is associated with easy removal of plants from the ground. Although still awaiting confirmation of the identification, Seona believes it to be very similar to a fungus described from Australia and Argentina, as it has a characteristic thick, ropey, white mycelium growing at the base of the plants.

While the search for New Zealand fungi for potential use in an inundative or augmentative biological control programme is well underway, the search for potential classical biocontrol agents in Australia and Argentina is proving to be equally fruitful. Testing to determine pathogenicity of the fungi that have been selected for further investigation will commence very soon in all three countries. “We want real killers for our noxious nassella,” said Seona. “In New Zealand we are specifically looking for agents that will reduce the numbers of seeds and seedlings, and inflorescence formation. We will also more than likely be looking at the progression of more than one fungal species to use in our arsenal to successfully control nassella tussock.”

In addition to these promising developments, the project is further supported by the development of a nassella tussock population model by Shona Lamoureaux (AgResearch), which will help predict the impacts of fungal biocontrol agents on the weed in New Zealand. So stay tuned for further updates! 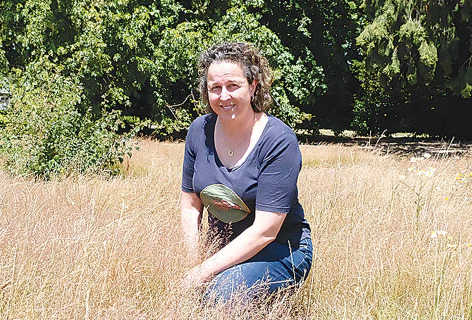 This project is funded by the Sustainable Farming Fund, administered by the Ministry for Primary Industries, with co-funding from Environment Canterbury, Marlborough District Council, the National Biocontrol Collective, and Manaaki Whenua – Landcare Research (Strategic Science Investment Funding), and from the Victoria Serrated Tussock Working Group and AgriBioscience in Australia.