There is growing recognition of the need to increase soil carbon stocks to improve soil fertility, enhance the sustainability and resilience of productive systems, and sequester carbon dioxide from the atmosphere to offset greenhouse gas emissions.

While international initiatives, such as the 4 per 1000 Initiative Soils for Food Security and Climate call for action for countries to achieve increases in soil carbon stocks, this is particularly challenging for New Zealand where soil carbon stocks are already high and grazed grassland is the dominant agricultural practice. A direct sampling approach requires a statistical sampling design within a spatial framework that samples the expected spatial variability and detects changes in soil carbon stocks within specified uncertainty limits over a period of about 5 years.

We have adopted an alternative approach to direct sampling that allows interpretation of changes in soil carbon stocks over short periods in relation to changes in management practices for the area where measurements are made. By measuring all the components of carbon inputs and losses at paddock scale (Fig. 1), the carbon balance approach provides continuous, cumulative estimates of changes in net ecosystem carbon stocks. The approach combines continuous measurements of ecosystem net CO2 exchange using a micrometeorological technique known as eddy covariance (Fig. 2) with site measurements of the other components in Figure 1. This approach also allows interpretation of the environmental and management variables that regulate seasonal and inter-annual changes in carbon stocks. 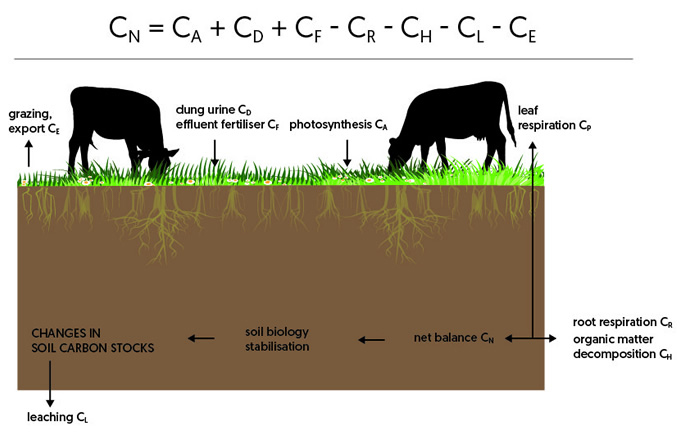 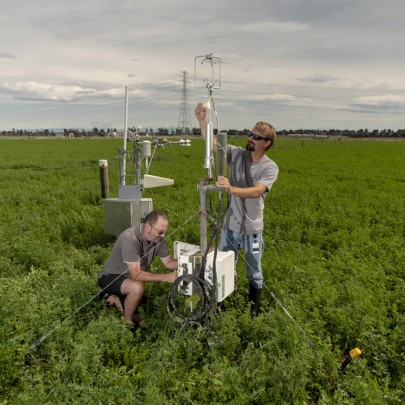 Applying these techniques, we have estimated changes in soil carbon stocks over 4 years for irrigated (with water and effluent) and non-irrigated lucerne at Lincoln University’s Ashley Dene Research & Development Station. The soil is excessively drained, very stony Balmoral silty loam typical of areas where conversion from dryland farming to intensive dairy farming has progressed rapidly in the last decade. The research is funded from our MBIE Endeavour Programme Reducing nitrogen losses from farms.

Increases in net carbon uptake during the spring growth period each year are clear (Fig. 3) but losses of carbon occur after each event when biomass is removed. Cycles of growth and harvest removal are repeated several times throughout the year but, in the late summer and autumn, carbon losses exceed inputs. Inter-annual differences can be attributed to seasonal differences in rainfall and the frequency and intensity of biomass removal. In the first 2 years, with continued biomass removal in summer and autumn, the ecosystem carbon balance became negative. Since we are measuring all carbon inputs and outputs (Fig. 1), and changes in above-ground carbon storage are minimal over the long term, the net loss must result from a decrease in soil carbon stocks. In the third year, the irrigated lucerne continued to lose carbon, but the non-irrigated lucerne showed an annual net increase. This is attributable to a lower intensity of biomass removal by animals compared with that from harvesting and the return of a modest amount of carbon in the deposits of dung and urine from the grazing animals.

The success of the carbon balance approach and our measurements over three years lead us to the conclusions that, for lucerne growing on well-drained, stony soils: 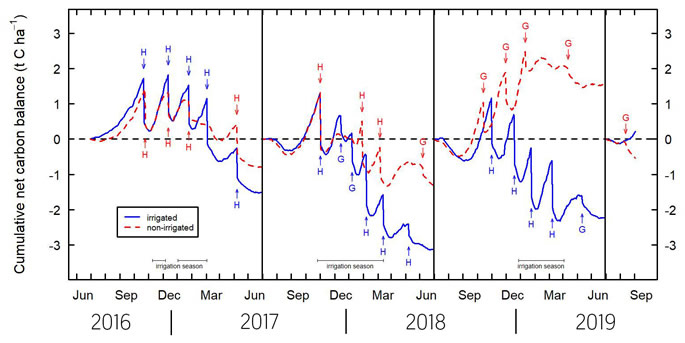 Fig 3. Cumulative net carbon balance for irrigated (blue line) and non-irrigated (red dashed line) lucerne for three years after the establishment of lucerne and start of the fourth year. The symbols H and G refer to events for harvesting and grazing, respectively and the duration of the irrigation seasons are indicated. The dashed black line is the carbon neutral state with lines above this showing net increases in ecosystem carbon storage and lines below this showing net carbon losses (adapted from Laubach et al. 2019). 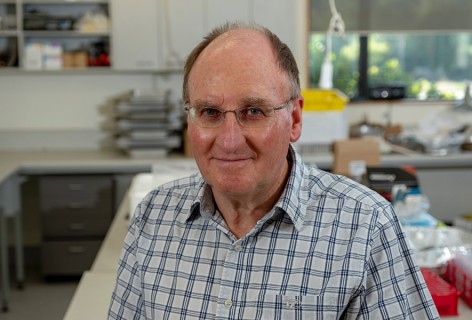